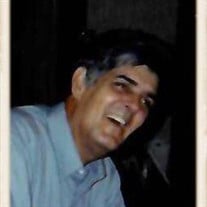 Willie “Tiny” Frank Wilkerson, age 73, of Jacksonville, Florida passed away on July 24, 2021 at St. Vincent’s Riverside in Jacksonville. He was born in Macclenny, Florida on April 16, 1948, to the late Willie Wilkerson and Thelma L. Hunter Wilkerson. Tiny was raised in Baker County and graduated from Baker County High School in June of 1966. In 1968, Tiny was drafted in the United States Army where he proudly served during the Vietnam War. After serving his country, Tiny enjoyed his career as a Truck Driver. He worked for P.I.E. for over 20 years and C.D.I. for 15 years until retiring in 2008. Tiny was of the Baptist faith and enjoyed attending various Baptist churches in Macclenny. In 2004, he moved to Jacksonville to be closer to family. He enjoyed playing golf, fishing, and hunting, but most of all, Tiny loved spending time with his granddaughter, spoiling her, and making special memories. He was preceded in death by his parents. Tiny is survived by his loving daughter, Alicia Wilkerson of Jacksonville, FL; brother, Casey (Elizabeth) Wilkerson of Macclenny, FL; and his granddaughter, Alexis Wilkerson. A Celebration of Tiny’s Life will be held on Friday, August 13, 2021 at 9:00 am at Jacksonville National Cemetery where military honors will be rendered. The arrangements are under the care and direction of V. TODD FERREIRA FUNERAL SERVICES, 1320 Chaffee Road South, Jacksonville, FL 32221 (904) 378-7777. Visit www.ferreirafuneralservices.com to sign the family’s guest book.

The family of Willie Frank Wilkerson created this Life Tributes page to make it easy to share your memories.

Send flowers to the Wilkerson family.