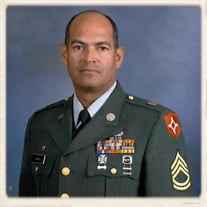 Marin– Wally Marin, age 64, of Starke, Florida passed away on August 20, 2021 at North Florida Regional Medical Center Starke Campus. He was born in Clinica Abreu, Santo Domingo on January 8, 1957 to the late David Silverio Marin and Antonia Garcia Marin. Wally was raised in the Dominican Republic until he was 10 years old when he and his family relocated to New York. While living in New York Wally began working at Job Corps International and after completing his work at Job Corps he enlisted in the United States Army. When he first joined the Army, Wally went to Fort Campbell, Kentucky where he attended Air Assault School and was awarded a badge of honor for his completion. During his military career, Wally was stationed in Germany for 7 years until being stationed at Fort Hood Texas. After several years in Texas, Wally moved to Live Oak, Florida and began his career at Camp Blanding in the National Guard as a Vehicle Maintenance Supervisor. In 1996, Wally met his long-time companion, Delia Cole and together they have spent 25 wonderful years. Wally relocated to Starke, FL after meeting Delia and made Starke his forever home. He was a longtime member of the American Legion in Starke where he was voted in as the Financial Officer where he enjoyed serving and participating. In 2015, Wally Retired from the United States Army/ National Guard after 37 years of proudly serving his country. During those years Wally was presented many medals and awards. Wally never met a stranger and was a friend to anyone, he was selfless and always put others first. He enjoyed helping everyone around him and was a handyman who loved tinkering with different things in his yard. Wally and Delia made the best memories together traveling in their motor home all across the United States. More than anything, Wally loved his family and will be missed by all who knew him. He is preceded in death by his parents. Wally is survived by his long time companion, Delia Cole of Starke, FL; son, Wally Antonio Marin of Live Oak, FL; step-daughters, Lottie (Tim) O’Connell of Ellabell, GA and June (Jared) Chustz of Dallas, TX; brothers, Alfonso Marin of South Lyon, MI, Delly Marin, and Otto Marin both of New York, NY; sisters, Paziris Zubialdea of Union, NJ, Julia Familia, Acela Marin both of Yonkers, NY, and Lucy Marin of Staten Island, NY; grandchildren, Alexa Rachel Benz, Patrick O’Connell, Phelan O’Connell, Sonya Chustz, and Brendon Chustz. A Celebration of Wally’s Life will be held at 3:00 PM on Thursday, August 26, 2021 at Archie Tanner Memorial Chapel with Dr. Charles Van Zant officiating. The family will receive friends an hour prior. Interment will be held at 10:00 AM on Monday August 30, 2021 at Jacksonville National Cemetery. Arrangements are under the care and direction of V. Todd Ferreira Funeral Services and Archie Tanner Memorial Chapel, Starke, Fl. 904-964-5757. Visit www.ferreirafuneralservices.com to sign the family’s guest book.

The family of Mr. Wally Marin created this Life Tributes page to make it easy to share your memories.

Marin– Wally Marin, age 64, of Starke, Florida passed away on...

Send flowers to the Marin family.