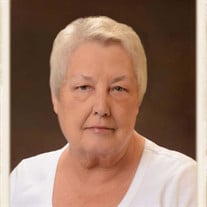 Ursel "Uschi" Thornton, 73, passed away at UF Shands hospital on Tuesday, August 3, 2021. Ursel was born on March 28, 1948, in Wuppertal-Cronenberg, Germany, to Adolf and Gerda Forster. Growing up alongside her three siblings, Ursel attended school (the gymnasium) in Germany and would often reminisce about being surrounded by her cousins and friends as a child. As a young woman, a handsome Army soldier Donald Thornton stole her heart. The two were married in a small ceremony on November 15, 1966, in Germany. They traveled to the United States with their first born son, where Ursel overcame many obstacles including the language barrier and her husband's tour of duty in Vietnam. Living on military bases around the country, they eventually made their home in Starke with four children in tow, as her husband began working as a letter carrier with the US Postal Service. Ursel began a career with Container Corporation in Starke, where she learned to drive heavy equipment and became the office manager and scaler, weighing in log trucks, for many years. She later found her niche working in the fashion industry as a saleswoman at Rosenblums in Jacksonville, where she flourished for over 20 years. Her greatest joy was spending time with her family, grandchildren and great grandchildren. She enjoyed sharing stories of her German heritage, especially Christmas traditions and German cuisine. Known as Nanny to many, she was a great cook, loved to shop and enjoyed having an afternoon "coffee clutch" with family and friends around her kitchen table. Ursel is survived by her children, Donnie (Brenda) Thornton, Stephanie (Greg) Alvarez, Pam (Tim) Moody, all of Starke and Steven Thornton of Washington, DC. Grandchildren, Justin (Brittany) Alvarez, Heather Alvarez, Nathan Thornton, Jessica (Juquan) Vickers, Nick Thornton, Lauren & Ethan Moody all of Starke. Great grandchildren, Collin, Jack, Harper, Bryce, and Ridge. Her brother Gerhard Forster of Germany, sisters Chris Watson of Shalimar, Florida, and Vroni Lang of Germany. Many nieces, nephews and cousins in the US and Germany. She was preceded in death by her parents, her husband Donald, and great grandson Cole. A Celebration of Ursel’s Life will be held on Saturday, August 7, 2021 at 4:00 pm at Archie Tanner Memorial Chapel Pastor Roman Alvarez officiating. The family will receive friends an hour prior at the funeral home, Arrangements are under the care and direction of V. Todd Ferreira Funeral Services and Archie Tanner Memorial Chapel, Starke, Fl. 904-964-5757. Visit www.ferreirafuneralservices.com to sign the family’s guest book

The family of Ursel F Thornton created this Life Tributes page to make it easy to share your memories.

Send flowers to the Thornton family.