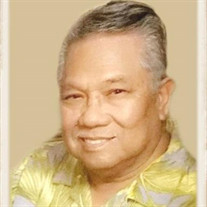 Back in 1995, On a trip back to the Philippines to visit his hometown, Segundo Sampilo had an unexpected encounter with Rudy, a childhood friend he had not seen in over thirty years. After reconnecting, Segundo, on his walk back to the car where... View Obituary & Service Information

The family of Mr. Segundo Melo Sampilo created this Life Tributes page to make it easy to share your memories.

Send flowers to the Sampilo family.