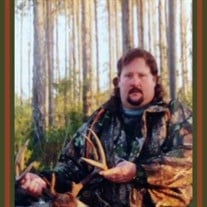 Bagley – Ronald “Ronnie” Alan Bagley, age 60, of Raiford, Florida passed away on January 4, 2022, at his residence with his loving wife by his side. He was born in Jacksonville, Florida on June 15, 1961, to his loving parents, Clarence Raymond Bagley and Mary Emma Collins Bagley. Ronnie was raised in Jacksonville, Florida and attended Sandalwood High School. As a child, Ronnie found his passion of working with his hands, a trait he learned from his father, which he was able to fulfill throughout his careers in carpentry and as a mechanic. Following school, Ronnie enjoyed his time as a carpenter where he was very successful in framing and building houses. He then worked as a mechanic for a season until he became a truck driver and built his own business, Flatbed Hauling in Raiford, Florida, a business he has owned and operated for the past 26 years. Ronnie was very hard working and known for always giving his best at anything he did, whether that be at work or in his off time. When not working, Ronnie could be found fishing. He fished just for pleasure and for competition in tournaments. He also enjoyed hunting, restoring cars, listening to ACDC, and watching Georgia Bulldog football, “Go Bulldogs”. In 1995, Ronnie met his lifelong love and best friend, Cindy Halas, and they were happily married on August 29, 2003. They have thoroughly enjoyed being companions, friends, and having each other during the good and bad times. Ronnie was a devoted husband, loving father, son, brother, and friend who was deeply loved and will be forever missed by all who knew him. Ronnie is survived by his loving wife of 19 years, Cindy Bagley of Raiford, FL; parents, Clarence and Mary Bagley of Jacksonville, FL; children, Alicia Bagley of Michigan and Ray Bagley of Jacksonville, FL; sister, Debra (Theo) Webb of Jacksonville, FL; granddaughter, Aayla Rae Bagley; niece, Kristi (William) Watson; nephew, Charles Egerer; uncle, Bo Collins; former wife and longtime friend, Pam Bagley; and his fur babies, Harvey, Punkin, Mr. Dude, and Little Man. A Memorial Celebration of Ronnie’s Life will be held on Saturday, January 15, 2022 at 1:00 PM at Raiford Community Center. Arrangements are under the care and direction of V. Todd Ferreira Funeral Services Lake Butler Chapel, 435 Main Street, Lake Butler, FL 32054. 386-496-1400. Visit www.ferreirafuneralservices.com to sign the family’s guest book.

The family of Mr. Ronald Alan Bagley created this Life Tributes page to make it easy to share your memories.

Send flowers to the Bagley family.