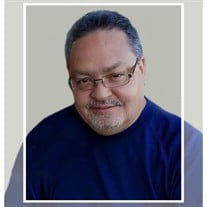 Caraballo – Robert “Ronnie” Pellicier Caraballo, age 60, of Middleburg, FL passed away on August 15, 2021 at Baptist Medical Center South in Jacksonville. Ronnie was born in Jersey City, New Jersey on July 13, 1961 to his loving parents Alfredo Caraballo, Sr. and Hilda Pellicier Caraballo. He was raised in Jersey City and graduated from Lincoln High School. Shortly after graduating, Ronnie joined the United States Navy and proudly served our country for 10 years. Following his honorable discharge from the military, Ronnie spent his time helping veterans readjust to life after the military. He took pride in helping others, especially his fellow brothers from the armed forces. Ronnie earned his bachelor’s degree in business administration and had a successful career at Career Source as their District Director where he dedicated over 15 years. More than anything, Ronnie was a simple family man who was passionate about all his family. He enjoyed family gatherings and especially enjoyed time with his grandbabies. He was an avid Mets baseball fan, Jacksonville Jaguars fan, and Florida Gator fan who also loved living life to the fullest and could be found using his grill master skills while singing and dancing. He was an amazing man who will be greatly missed by all who knew him. Ronnie was preceded in death by his brother, Willie Caraballo. Ronnie is survived by his wife of 11 ½ years, Teresa Vanaman of Middleburg, FL; his parents, Alfredo and Hilda Caraballo, Sr. of Jersey City, NJ; children, Danielle (Dan Greer) Gonzalez of Ponte Vedra, FL, Melisa (Michael, II) Widrig, Stephanie Reid, and Gage (Michelle Gill) Degnan all of Jacksonville, FL, and Jacob McKee of Orlando, FL; brother, Alfredo Caraballo, Jr. of Philadelphia, PA; sister, Carmen Caraballo of Jacksonville, FL; grandchildren, Andy Gonzalez, Alina Gonzalez, Davie Cogswell, Taylor Cogswell, and Michael Widrig, III; along with numerous nieces, nephews, and extended family members and friends. A Celebration of Ronnie’s Life will be held on Tuesday, August 24, 2021 at 11:00 am at Ferreira Funeral Services Chaffee Road Chapel with Chaplain Jim Cox officiating. Interment will follow at Jacksonville National Cemetery at 1:00 pm where military honors will be rendered. The family will receive friends on Monday, August 23, 2021 from 6:00 – 8:00 pm at the funeral home. Arrangements are under the care and direction of Ferreira Funeral Services, 1320 Chaffee Road South, Jacksonville, FL, 32221, 904-378-7777. Visit www.ferreirafuneralservices.com to sign the family’s guest book.

The family of Mr. Robert Pellicier Caraballo created this Life Tributes page to make it easy to share your memories.

Send flowers to the Caraballo family.