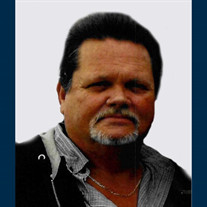 Wolfe – Rickey Lee Wolfe, age 62, of Waldo, Florida went to his heavenly home on October 25, 2020 at Shands at the University of Florida in Gainesville. He was born in Miami, Florida on March 14, 1958 and was raised by his mother Mildred Williams O’Steen and father Gene O’Steen. Rickey relocated to Bradford County where he attended Bradford High School and shortly after proudly served his country in the United States Army for 7 years. On March 13, 2013 Rickey married the love of his life Kathy Wolfe and together they spent 9 beautiful years. He was a member of Sampson City Church of God where he enjoyed attending and worshipping his Lord and Savior, Jesus Christ. Rickey enjoyed working outside with wood, but most importantly spending time with his grandkids and wife. More than anything, Rickey was a family man, who loved his family dearly. Rickey was proceeded in death by his father; and sister Marlene Olive. Rickey is survived by his loving wife, Kathy Wolfe of Waldo, FL; his mother, Milie O’Steen of Hampton, FL; his daughters, Nichole (Mike) Kelly of Howey-in-the-Hills, FL, Rachel (Levi) Keene of Pembroke, GA; his son, Jason (Lisa ) Wolfe of Palm Coast, FL; his brother, Danny (Jennifer) Wolfe of Starke, FL; his sisters, Wanda (JR) Johnson of Keystone Heights, FL, and Brenda Roberson of Hampton, FL; his grandchildren, Ariel, CheyAnn, Madilynn, Eveliegh, Beo, Levi Jr., and Hannah Grace. A Memorial Celebration of Rickey’s Life will be held on Saturday, October 31, 2020 at 11:00 AM at Sampson City Church of God with Reverend Gene Bass officiating. In lieu of flowers please make donations to hospice. Arrangements are under the care and direction of V. Todd Ferreira Funeral Services and Archie Tanner Memorial Chapel, Starke, Fl. 904-964-5757. Visit www.ferreirafuneralservices.com to sign the family’s guest book.

Wolfe &#8211; Rickey Lee Wolfe, age 62, of Waldo, Florida went to his heavenly home on October 25, 2020 at Shands at the University of Florida in Gainesville. He was born in Miami, Florida on March 14, 1958 and was raised by his mother Mildred... View Obituary & Service Information

The family of Rickey Lee Wolfe created this Life Tributes page to make it easy to share your memories.

Send flowers to the Wolfe family.