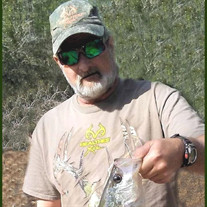 Cowart – Randall B. Cowart, age 51, of Sanderson, Florida passed away on May 18, 2021 at Ed Fraser Memorial Hospital. He was born in Jacksonville, Florida on March 13, 1970 to Billie Jean Vincent and the late Jack Randall Cowart. Randall was raised in Baldwin and started working at an early age as a Roofer for Doug Carlton and Preston Johnson in Jacksonville. Soon after, he met the love of his life, Deborah Freeman, and they were happily married on December 18, 1990. Randall was a devoted husband, loving father and grandfather. He enjoyed his time as a Roofer and also as a Commercial Fence Installer. Randall worked at Newsome Fence for a few years until retiring in the 1990’s. Randall was most passionate about mud bogging. Even as a young boy he was known to find or make a mud puddle. He loved being outdoors; hunting, fishing, driving his 4X4 trucks and four wheelers in the mud, drag racing, and attending monster truck events, but more than anything, he was a family man who loved his family dearly and enjoyed spending time with them all. Randall is preceded in death by his father; stepfather, Thomas Daniel Everson; and his daughter, Ashley Elaine Cowart. Randall is survived by his loving wife, Deborah Cowart of Sanderson, Florida; mother, Billie Jean Everson of Baldwin, FL; son, Brandon Michael (Sabrina) Cowart of Sanderson; grandchildren, Levi Waylon Cowart and Alexandria Elaina Cowart; and his best friend who was like his brother, Scotty McDaniel. A Celebration of Randall’s Life will be held Saturday, June 12, 2021 at 3:00 p.m. at Heritage Park. Arrangements are under the care and direction of V. TODD FERREIRA FUNERAL SERVICES, 250 North Lowder Street, Macclenny, FL 32063 (904)259-5700. Visit www.ferreirafuneralservices.com to sign the family’s guest book.

Cowart &#8211; Randall B. Cowart, age 51, of Sanderson, Florida passed away on May 18, 2021 at Ed Fraser Memorial Hospital. He was born in Jacksonville, Florida on March 13, 1970 to Billie Jean Vincent and the late Jack Randall Cowart. Randall... View Obituary & Service Information

The family of Mr. Randall B. Cowart created this Life Tributes page to make it easy to share your memories.

Send flowers to the Cowart family.