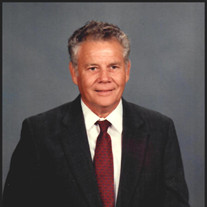 Davis - R. H. “Dickie” Davis, age 89, of Macclenny, Florida went to his heavenly home on August 17, 2020 at Ed Fraser Memorial Hospital with his loving family by his side. Dickie was born in Macclenny, Florida on April 2, 1931 to the late Richard John and Carrie Harvey Davis. He was a lifelong resident of Baker County and graduated from Baker County High School in 1950. Shortly after graduation, Dickie was drafted into the United States Army where he proudly served during the Korean War from 1951 – 1953. Dickie married the love of his life, Faye Cowart on January 28, 1954. Dickie was a devoted husband, adoring father, grandfather, and great grandfather who loved all his family and friends dearly. In 1956, Dickie purchased Davis Oil from his father, R.J. Davis. He was passionate about his career and grew R.H. Davis Oil Company from 1 location to 36 locations. After 49 years of dedicated service in the oil industry, Dickie retired in 2005, passing his legacy on to his son, Ricky Davis. After retirement, Dickie enjoyed buying and selling land. His buyers’ happiness was of upmost importance to him. Dickie was an accomplished man who served as a Master Mason, Past Master Dawkins Lodge in Macclenny, FL, member of the Scottish Rite and Moroccan Shrine Temple in Jacksonville, FL, and was a contributing founding member of the Baker County Memorial Stadium. He was an avid football fan who supported the Baker County Wildcats lifelong as well as a Florida Gator Booster member for 36 years. Dickie was also passionate about his community, enjoyed his time as a County Commissioner for 12 years, and also started the Country Credit Union and served as President for 12 years. Dickie enjoyed attending Macclenny Church of Christ where he was a longtime member, traveling in his motor home, but more than anything, Dickie loved his family and friends and enjoyed spending time with them. He was preceded in death by his parents; daughter, Renee Davis Jessman; sisters, Katherine Davis Johns and Violet Davis Rewis; son-in-law, Ronnie Freeman; and brothers-in-law, Clarence Johns and Chub Rewis. Dickie is survived by his lovely wife of 67 years, Faye Cowart Davis of Macclenny, FL; his children, Ricky (Gena) Davis and Dana Freeman both of Macclenny, FL; grandchildren, Bryan (Becky) McDuffie, Vince McDuffie, Misti Lageman, Carrie Starling, Tanya (Doug) Stewart, Max (Stephanie) Davis, Sarah (Brian) Rauch, Klate Jessman, Tina (Jason) Lyons; 23 great grandchildren; along with many lifelong friends. A Celebration of Dickie’s life will be held on Friday, August 21, 2020 at 3:00 p.m. at Christian Fellowship Temple Church with Reverend Sam Kitching officiating. Entombment will follow at Woodlawn Cemetery. The family will receive friends on Friday from 2:00 – 3:00 p.m. at the church. Arrangements are under the care and direction of V. TODD FERREIRA FUNERAL SERVICES, 250 North Lowder Street, Macclenny, FL 32063 (904)259-5700. Visit www.ferreirafuneralservices.com to sign the family’s guest book.

The family of Mr. R. H. "Dickie" Davis created this Life Tributes page to make it easy to share your memories.

Send flowers to the Davis family.