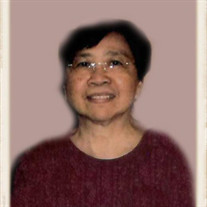 Presentacion (Precy) Santos Tinio M.D., age 81 of Kew Gardens, NY passed away on December 28, 2021, at her residence. She was born on November 21, 1940, in Manila Philippines to the late Dominador J. Tinio and Marciana Santos. She obtained her medical degree at the University of Santo Tomas (Philippines) in 1964. She worked in Manila until she immigrated to the United States with her parents in 1968. To fulfill requirements for U.S. Medical licensure, Dr. Tinio did a year internship in Chicago, Illinois. Subsequently, she completed three years residency in Anesthesiology at Beth Israel Hospital and Metropolitan Hospital in New York City. Thereafter, Dr. Tinio worked in her medical specialty in different hospitals in New York City. Dr Tinio retired in 2004 and became a resident of Florida to join her sister and now deceased brother-in-law in Hampton Lake. Dr Tinio kept a second residence in Kew Gardens, New York, because she was a devoted Catholic and had been an active member of the Third Order Lay Carmelites since 1981. She belonged to Our Lady of the scapular chapter in Manhattan, New York, where she served in different positions such as Formation Instructor, Chapter Director and Formation Director Indeed Dr. Tinio had three great loves in her life: her family, her medical profession, and her religion. She will be missed by many. She was preceded in death by her parents; brother Rolando S. Tinio; sister-in-law Ella Luansing Tinio; brother-in-law James F. Ripka. Presentacion (Precy) is survived by her sister, Filipinas “Fe” Tinio Ripka of Hampton, Fl; nephew, Antonio L. (Trina P.) Tinio; niece, Victoria L. Tinio; grandnephew, Marko Tinio of the Philippines. The funeral mass will be held on Saturday, January 8, 2021, at 10:30 am at St. Edward Catholic Church with Father Jan Ligeza as celebrant. Interment will follow at Santa Fe Cemetery in Hampton, Florida Arrangements are under the care and direction of V. Todd Ferreira Funeral Services and Archie Tanner Memorial Chapel, Starke, Fl. 904-964-5757. Visit www.ferreirafuneralservices.com to sign the family’s guest book

Presentacion (Precy) Santos Tinio M.D., age 81 of Kew Gardens, NY passed away on December 28, 2021, at her residence. She was born on November 21, 1940, in Manila Philippines to the late Dominador J. Tinio and Marciana Santos. She obtained... View Obituary & Service Information

The family of Ms. Presentacion Santos Tinio created this Life Tributes page to make it easy to share your memories.

Send flowers to the Tinio family.