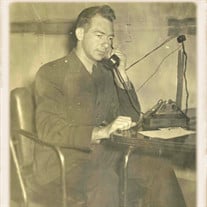 Seasholtz - Paul Seasholtz, age 98, of Jacksonville, Florida passed away on January 13, 2022, at his residence with his loving family by his side. He was born in Waycross, Georgia on June 15, 1923, to the late Emory Seasholtz and Nellie Harrell Seasholtz. Following high school, Paul proudly joined the United States Army on June 24, 1942. He completed his induction at Ft. Thomas in Newport, Kentucky, and his basic training at Keesler Air Force base in Biloxi, Mississippi. He served at several stateside bases before transferring overseas in Reykjavik, Iceland during World War II. Paul spent the remainder of his wartime military service coding and decoding information for the Army Air Corps as well as the American Overseas Airlines. On March 22, 1944, Paul was honorably discharged from the Army. He was a very intelligent man who was truly a jack of all trades. He was an inventor, an entrepreneur, a pilot, and could fix anything. In the late 1940’s, Paul met the love of his life, Evelyn Hendrix and they were happily married on April 3, 1948. He was a devoted husband, loving father, grandfather, and great grandfather who always took care of his family. Paul worked in various fields throughout his life and was successful at them all. He worked for the Postal Service, the railroad, for WAYX radio station as an announcer, was the owner and operator of many businesses, Cherokee Restaurant and Ware Air Conditioning Company both in Waycross, GA, and Advanced Heating and Air Conditioning in Jacksonville, FL. In the late 1960’s, Paul and Evelyn made Jacksonville, Florida their forever home. After retiring from the air conditioning business, Paul enjoyed custom building computers as a computer technician. He also enjoyed flying, boating, fishing, camping, keeping up with the news and current events, visiting all his neighbors who he knew well, along with spending time with his family. Paul loved life, lived to the fullest and will be missed by all who knew him. He was preceded in death by his parents; loving wife, Evelyn Hendrix Seasholtz; siblings, Grant Seasholtz, Katherine Saye, Dorothy Robertson, and Mary Smith; daughters, Freida Hammer and Greta Walker; and son-in-law, Keith Green. Paul is survived by his children, Karl Seasholtz of Jacksonville, FL, Sheila (Scott) Cole and Judy Look both of St. Augustine, FL, Susan Green of Jacksonville, FL; son-in-laws, Roger Hammer and Bob Walker; 8 grandchildren, Kimberly, Kevin, Dawn, Crystal, Mitchell, Amanda, Harrison, and MacKenzie; and his 8 great grandchildren. A Graveside Celebration of Paul’s Life will be held Friday, January 21, 2022, at 2:00 pm at Macedonia Cemetery where military honors will be rendered, and Pastor Andrew Hale will be officiating. Interment will follow at Macedonia Cemetery. Arrangements are under the care and direction of V. TODD FERREIRA FUNERAL SERVICES, 250 North Lowder Street, Macclenny, FL 32063 (904) 259-5700. Visit www.ferreirafuneralservices.com to sign the family’s guest book.

Seasholtz - Paul Seasholtz, age 98, of Jacksonville, Florida passed away on January 13, 2022, at his residence with his loving family by his side. He was born in Waycross, Georgia on June 15, 1923, to the late Emory Seasholtz and Nellie Harrell... View Obituary & Service Information

The family of Mr. Paul Seasholtz created this Life Tributes page to make it easy to share your memories.

Send flowers to the Seasholtz family.