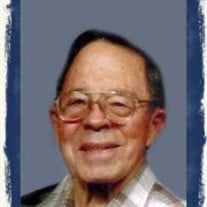 “What a day that will be when my Jesus I shall see!” On the morning of October 27, 2020 at 99 years of age, Paul Ignatius Meng left his earthly body and entered into the heavenly presence of his Lord and Savior Jesus Christ, and these words by hymnwriter Jim Hill became his reality. A long-time resident of Hampton Lake, Paul dedicated his life to serving God, his country, his family, and his neighbors and friends. Following his graduation in 1943 from the U.S. Merchant Marine Academy in Kings Point, NY, Paul served with the U.S. Maritime Service during World War II aboard Navy SS Jeremiah S. Black from July 1943 to January 1944. From February 1944 to May 1945, he served aboard Army SS Exiria in the Pacific. In 1946, Paul married his sweetheart, Ruth Mouch, at the Holy Rosary Cathedral in Toledo, Ohio. After their honeymoon, they moved to Hampton, Florida where they raised their family of eleven children. Paul and Ruth owned and operated Meng’s Dairy Farm on the east side of Hampton for 15 years. Paul also worked full time as an industrial electrician. He was well-known for his generosity in sharing his electrical expertise with friends and neighbors. Paul’s greatest joy was serving his Lord and Savior, Jesus Christ. He loved reading his Bible, singing, and telling others about the Lord. Paul devoted his life to his wife, children, and grandchildren, and his home was always open to visits from family members. He also loved his country and strongly supported the preservation of the liberties and privileges protected under the Constitution. Paul was preceded in death by his loving wife of 68 years, Ruth Eleanor Mouch Meng; his parents, Lawrence and Freda (Wald) Meng; his brothers Raymond and Francis (twin); and sisters Angel Stoffer and Loretta Vasques. Paul is survived by his 11 children, 26 grandchildren, and many great-grandchildren, nieces and nephews, and one sister. Sons: Carlton of Keystone Hgts, FL, Bill (Betsy) of Keystone Hgts, FL, Marty of Old Town, FL, Joe (Debbie) of Ochlocknee, GA, Mike of Macclenny, FL, and John (Karen) of Pembroke, GA. Daughters: Carolyn Hunter-Haast of Hiawassee, GA, Phyllis McClure of Tampa, FL, Joyce (John) Thiemann of Hampton Lake, FL, Sallye (Randy) Scoggins of Hampton Lake, FL, Beverly (David) Wanner of Oxford, NC. Sister, Virginia (Don) Giles of Genoa, OH, sister-in-law Dolores Meng of Hampton Lake, FL. A Celebration of Life will be held on Saturday, November 7, 2020 at 11:00 a.m. at Ferreira Funeral Services and Archie Tanner Memorial Chapel, 14397 US 301 S, Starke, FL 32091. The family will receive visitors one hour before the service. In lieu of flowers, contributions in Mr. Meng's memory may be made to Bradford Ecumenical Ministries Food Pantry, 2226 N Temple Ave, Starke, FL 32091 or your favorite charity.

&#8220;What a day that will be when my Jesus I shall see!&#8221; On the morning of October 27, 2020 at 99 years of age, Paul Ignatius Meng left his earthly body and entered into the heavenly presence of his Lord and Savior Jesus Christ, and... View Obituary & Service Information

The family of Paul Ignatius Meng created this Life Tributes page to make it easy to share your memories.

“What a day that will be when my Jesus I shall see!” On the morning...

Send flowers to the Meng family.