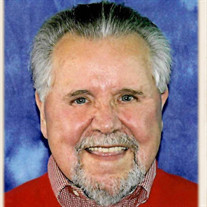 Bollinger - Michael E. “Hot Dog” Bollinger, 72, of Gray, Tennessee, went to his Heavenly Home on April 7, 2021 at the Douglas Care Center in Jacksonville, with his loving family by his side. Michael was born in Benton, Missouri on July 20, 1948 to the late Monroe Bollinger and Frances Marie Michael Bollinger. He was raised in Benton and graduated from Thomas W. Kelly High School. Shortly after graduating, he attended Southeast Missouri State University where he earned his Bachelor of Science degree in business. Michael met the love of his life, Cathlin Joy Chittenden, in 1978 and married on October 27, 1979. He served as a claims adjuster for 39 years until his retirement in 2012. He was a devoted husband, loving father, grandfather, great grandfather, brother, and friend. He had an amazing funny personality, quick witt, a servants’ heart, and a passionate love for God and family. He was known for his love of volunteering at the local hospital and food bank and served as a deacon at Preaching Christ Church in Kingsport, TN. Michael enjoyed traveling, loved football and was an avid fan of the St. Louis Cardinal baseball team. He will truly be missed by all who knew and loved him. Michael is survived by his loving wife of 41 years, Cathlin “Joy” Bollinger; son, Matthew “Matt” Cody (Kimberly) Bollinger of Jacksonville, Florida; brothers, Tommy Bollinger of Jackson, Missouri and William “Bill” Bollinger of Cape Girardeau, Missouri; grandchildren, Sara Bollinger, Joshua (Sara Cauchon) Bollinger, Julie (Cayce Burgess) Mason, Michael (Monica) Bollinger, Matthew Mason, great grandchildren; Nicholas Ackerson, Kyleigh Bollinger, Jackson Cauchon, Aiden Bollinger, Carson Bollinger, Rafael Bollinger; along with numerous nieces and their sweet toy poodle, Brandi Bollinger. A Celebration of Michael’s Life will be held on Monday, April 12, 2021 at 11:00 am at V. Todd Ferreira Funeral Services Chaffee Chapel located at 1320 Chaffee Road South, Jacksonville, FL, 32221 (904-378-7777) with Pastor Chad Roberts officiating. The family will receive friends on Monday an hour prior to the service at the funeral home. The family kindly requests that all who come to pay their respects would wear a mask.

Bollinger - Michael E. &#8220;Hot Dog&#8221; Bollinger, 72, of Gray, Tennessee, went to his Heavenly Home on April 7, 2021 at the Douglas Care Center in Jacksonville, with his loving family by his side. Michael was born in Benton, Missouri on... View Obituary & Service Information

The family of Michael Edward Bollinger created this Life Tributes page to make it easy to share your memories.

Send flowers to the Bollinger family.