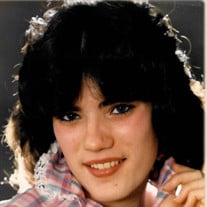 Mary Florence Hayes, beautifully bloomed at 56 years of age, a native of Jacksonville Florida, she passed away on October 18, 2021 at her son's home in Coronado, California. She was born on August 16, 1965 to Elizabeth Anne Jenkins Greenwood and the late Harold Ford. Mary was born and raised in Massena, NY. After graduating Massena Central High-School, she joined the United States Navy and was stationed in California for the first 4 years and then came to Jacksonville and gave birth to her firstborn son, Michael. During her second term in the Navy, she gave birth to her second born son, Bradley, and decided she wanted to devote her life to raising her sons and so was honorably discharged after 8 years of service. Mary worked multiple jobs to provide for her sweet son's and did whatever it took to make sure they had what they needed. This meant she walked miles to and from work on a daily basis to make sure things were handled. Mary enjoyed nothing more than spending time with her family and grandson. This brought her life meaning and purpose and filled her heart more than anyone will ever know. She also enjoyed going to the Beach and sitting by the Ocean letting the waves wash away any worries or cares. Reading, wood burning crafts and collecting and giving away crystals were her passions. Mary helped and uplifted any and everyone she came into contact with and will be missed deeply by all that loved and knew her. She was truly our Angel in disguise. Mary was preceded in death by her father, Harold and her husband Brad Odell Hayes. Mary is survived by her sons, Michael (Karissa) Ford of Coronado, California, and Bradley Jordan Hayes of Jacksonville Florida; brothers, Joseph (Cheryl) Ford, David (Gina) Ford; sisters, Lisa (Lee) Fregoe, Valerie Haynes, Beth Ford and Marcey (Ted) Brothers; and handsome little grandson Michael Ford, II. A Memorial Visitation will be held on Tuesday, November 9, 2021 at Ferreira Funeral Services at Beaches Memorial Park Chapel from 11:00 am – 1:00 pm. The arrangements are under the care and direction of V. Todd Ferreira Funeral Services at Beaches Memorial Park, 1500 Main Street, Atlantic Beach, FL 32233. 904-249-1166.

Mary Florence Hayes, beautifully bloomed at 56 years of age, a native of Jacksonville Florida, she passed away on October 18, 2021 at her son's home in Coronado, California. She was born on August 16, 1965 to Elizabeth Anne Jenkins Greenwood... View Obituary & Service Information

The family of Ms. Mary Florence Hayes created this Life Tributes page to make it easy to share your memories.

Send flowers to the Hayes family.