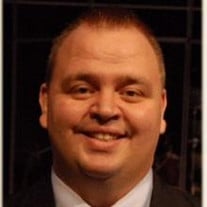 Mark Allen Cercy, 36, of Jacksonville, entered into his Heavenly home on December 26, 2020. He was born in Houma, Louisiana on September 16, 1984, resided most of his life in Jacksonville, Florida and recently moved his family to Pittsboro, North Carolina for his job with Walmart Corporation. Mark had a rough beginning in life and went into the foster system as a young child. He then spent many years going from home to home and faced abuse in several of those, which left him full of anger and bitterness, and the darkness beckoned. When Mark was a young teenager, he was sent to yet another home. As Mark entered the Cercy household, as he loved to tell, he literally felt the presence of the Lord wash over him as he walked through the door. This home was different, and it would be where Mark encountered the cross and accepted Jesus as his Savior. The Cercy’s started in attendance at Evangel Temple Assembly of God where Mark grew in the Lord and found a passion in witness outreach and was a part of numerous mission endeavors at home and abroad. It was here in his senior year of high school that he met the love of his life, Cindy, and two years later they were married. Mark soon started into full time ministry with a special heart for at risk youth lost in the darkness as he once was. He became a well-loved youth pastor for many years at several area churches, with the majority of those years spent serving at Westside Family Worship Center. Through the years, Mark and Cindy welcomed four beautiful children and many unofficially adopted youth-group kids. Mark was an attentive and loving husband who was a true helpmate, best friend and soulmate to his wife. As a father, Mark was a fun and hands on Dad who made sure his children were confident in both their worth and his love for them but most importantly, Mark taught his children about their Heavenly Father and was a mirror to reflect the light of Jesus’ love back to them. A caring son and brother, a faithful friend and a warrior for Christ. Mark was preceded in death by his mother, Debra J. Cercy (2010). Survivors include: his loving wife of 15 years, Cindy, and their four children, Micah (10), Annaliese (8), Briella (5), and Lilabeth (3), his father, Paul D. Cercy (Karen), brothers Paul D. Cercy II., Christopher S. Cercy (Rachel), Christopher L. Cercy, Steven Thomas, Mike Ingram (Lisa), Shane Knowles, Alexander Cercy, sisters Charlene Higgs (Eddy), Diana Thomas Oakley, Hope Cercy Jordan (Joe), Bridget Henry along with numerous nieces and nephews. Funeral services will be held 11:00 AM, Thursday January 7, 2021 at Evangel Temple Assembly of God, 5755 Ramona Blvd., Jacksonville, FL. The family will receive friends and family one hour prior to the service at the church. Interment will follow at Holly Hill Memorial Park, Middleburg, FL. In lieu of flowers, contributions to the family are suggested. Arrangements by Ferreira Funeral Services, 1320 Chaffee Road, South, Jacksonville, FL 32221, 904-378-7777. Visit www.ferreirafuneralservices.com to sign the family’s guest book.

Mark Allen Cercy, 36, of Jacksonville, entered into his Heavenly home on December 26, 2020. He was born in Houma, Louisiana on September 16, 1984, resided most of his life in Jacksonville, Florida and recently moved his family to Pittsboro,... View Obituary & Service Information

The family of Mark Allen Cercy created this Life Tributes page to make it easy to share your memories.

Mark Allen Cercy, 36, of Jacksonville, entered into his Heavenly...

Send flowers to the Cercy family.