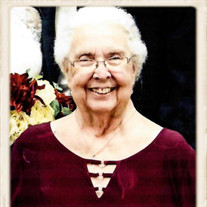 Prevette – Marian Jean Prevette, age 86, of Glen St. Mary, Florida passed away November 23, 2020 at Community Hospice Alice and T. O'Neal Douglas Center for Caring. She was born November 28, 1933 in Canton, Ohio to the late Eugene Shively and Louise Varner Shively. Marian was raised in Canton, Ohio and moved to Miami, Florida where she met the love of her life, Jim Prevette, and married him in 1970. While in Miami she worked as a lab technician. In 1977 they moved to Glen St. Mary, Florida where Marian was a homemaker and took care of her family. Marian and Jim owned and operated M & J Furniture in Glen St. Mary for a few years. Marian was a beloved member of Glen Baptist Church which she considered to be her second family. She enjoyed crocheting, cross-stitching, craft shows and spending time with her family. Marian is preceded in death by her parents; loving husband of 25 years, Jim Prevette; brother, Jerry Shively. Marian is survived by her four daughters, Harriet Shutters of Glen St. Mary, FL, Barbara (Rob) Logsdon of Folkston, GA, Tina (Robbie) Davis of Macclenny, FL, Toni Atkinson of Folkston, GA; 7 grandchildren; 8 great grandchildren. A Memorial Service will be held at a later date. Arrangements are under the care and direction of V. TODD FERREIRA FUNERAL SERVICES, 250 North Lowder Street, Macclenny, FL 32063 (904)259-5700. Visit www.ferreirafuneralservices.com to sign the family’s guest book.

The family of Ms. Marian J Prevette created this Life Tributes page to make it easy to share your memories.

Send flowers to the Prevette family.