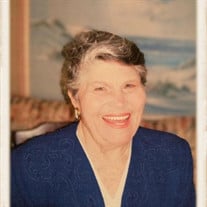 Margaret Louise Carter Arwood Cribb, 93, passed to the next life in the early hours of March 15, 2022, at her home in Hartwell, GA. She was born in Lawtey, FL, on December 30, 1928, the oldest daughter of late Carl "Bub" Francis Carter and Mildred Louise Durban Carter. Margaret grew up as a farmer's daughter in Lawtey, she played the accordion and sang in church and for the USO during WWII. She met and married Wesley Lee Arwood II in August 1946, moved to Green Cove Springs, and finished High School at Clay County High School in 1947. Margaret was a homemaker; she and "Woody" moved around as he proudly served his country in the United States Navy. They lived in Key West, FL, Jamestown, RI, Guantanamo Bay CUBA, Pascagoula, MS, and Jacksonville, FL. In the 60s, she ran a little grocery store in Lawtey. However, she was most passionate about raising her six babies and taking care of her home. After Wesley retired from the Navy, he and Margaret settled in Melrose, FL. She later lived in Jacksonville FL and worked at the Barnett Bank of Murray Hill. Margaret married a second time in 1980 and traveled worldwide with her second husband; they visited Europe, Russia, China, New Zealand, and Australia. They had a condo in Hawaii and St Augustine Beach, then Orange Park, FL; she made friends everywhere she went. Since 2012 Margaret has lived in Hartwell, GA, with her daughter. Most of all, Margaret loved her family and will be missed by all who knew her. She was preceded in death by her parents, two spouses; sister, Linda Sweat; and her two sons, Douglas and Mark Arwood. She is survived by her children, Wesley (Claudia) Lee Arwood III of Alachua, FL, Charles (Debbe) Arwood of Charlton County, GA, Nancy (Richard) League of Hartwell, GA, and Victor Arwood of Lawtey, FL; brothers, Donald Carter of Kingsley Lake, FL and William Carter of Lake Hartwell, GA; sister, Ann Macy of Kingsley Lake, FL; daughters-in-law, Mary Arwood and Sandy Arwood; grandchildren, Emily, Yvonne, Tabatha, Thaddeus, Trevor, Alan, Tristan, Megan, Sarah, and Hunter; and several great-grandchildren. A Graveside Celebration of Margaret’s Life will be held on Saturday March 19, 2022 at 11:30 am Archie Tanner Memorial Chapel with Pastor Jonathan Rodriguez officiating. The family will receive friends from 10 am–11 am at the funeral home. Arrangements are under the care and direction of V. Todd Ferreira Funeral Services and Archie Tanner Memorial Chapel, Starke, Fl. 904-964-5757. Visit www.ferreirafuneralservices.com to sign the family’s guest book.

Margaret Louise Carter Arwood Cribb, 93, passed to the next life in the early hours of March 15, 2022, at her home in Hartwell, GA. She was born in Lawtey, FL, on December 30, 1928, the oldest daughter of late Carl "Bub" Francis Carter and Mildred... View Obituary & Service Information

The family of Margaret Louise Carter Arwood Cribbs created this Life Tributes page to make it easy to share your memories.

Margaret Louise Carter Arwood Cribb, 93, passed to the next life...

Send flowers to the Cribbs family.