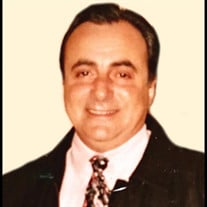 Russo - Lawrence “Larry” Russo, age 73, of Atlantic Beach, Florida passed away on March 1, 2021 at Baptist Medical Center Beaches. He was born in Staten Island, NY on June 9, 1947 to the late Joseph Vincent Russo and Rose Russo. Larry was raised in New York and relocated to San Francisco, California as a young adult. He was a Paralegal for many years, but also enjoyed exploring his entrepreneurial side. Larry owned and operated, J.R.’s Auto in California, was a Manager at Steve Hull Chevrolet dealership in Jacksonville, FL, as well as owning and operating a bar, Friends which he later bought again and renamed, Friend’s Again Eatery and Pub in Jacksonville, FL. When Larry wasn’t working, he enjoyed fishing, traveling, watching movies, going to theme parks, especially Universal Studios. At a young age, Larry was raised on a farm and learned how to ride horses. He became a talented horse rider as an adult. More than anything, Larry loved his family and enjoyed spending time with them. He was preceded in death by his parents and siblings. Larry is survived by his loving wife of 19 years, Christine Russo of Atlantic Beach, FL; children, Lorie, Lisa, Larry, Cody, and Joseph Vincent Russo, II; brother, Carmine Russo; grandchildren, Harvey and Nehemiah; along with numerous nieces, nephews, cousins, extended family members and friends Larry loved dearly. A Graveside Celebration of Larry’s Life will be held on Wednesday, March 10, 2021 at 2:00 pm at Beaches Memorial Park. The arrangements are under the care and direction of V. TODD FERREIRA FUNERAL SERVICES at Beaches Memorial Park, 1500 Main Street, Atlantic Beach, FL 32233. (904) 249-1166.

The family of Mr. Lawrence "Larry" Russo created this Life Tributes page to make it easy to share your memories.

Send flowers to the Russo family.