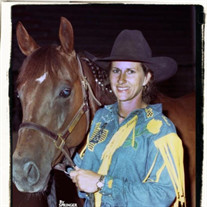 Landry – Kim Elaine Landry, age 61, of Starke, Florida, went to her heavenly home on January 13, 2021 at her residence in Starke with her loving family by her side. She was born in Starke, Florida, on March 1, 1959, to the late Edmond D Tenly and Virginia Shannon Tenly. Kim was a lifelong member of First Baptist Church of Starke. She graduated from Bradford High School in 1977 where she was a member of the Bradford FFA and was elected as the first female president of the FFA. After graduating high school Kim worked at the local Gold Kist Feed store for 16 years before leaving to train full time at her Cloverleaf Farm. Kim had a passion for horses and barrel racing. She devoted her life to learning and growing as a professional barrel racer. She knew what it took to make it to the top and she did just that. Kim was the first female barrel racer outside of the rodeo arena to win over a million dollars. She owned the Old Fort Days Futurity in the 90’s winning it in 1993, 1996, and 1997. When she was not competing in the arena, she was training outside horses for the next year’s competition. In 1993, she was awarded the first district director of the year by the NBHA in August, GA. Kim was looked up to by many in the barrel racing industry for her guidance and dedication to help anyone at any level. Later in life, Kim found a passion for deer hunting and enjoyed being in the woods as much as possible. More than anything, Kim loved her family and will be missed by all who knew her. She was preceded in death by her father. Kim is survived by her mother, Lane Tenly of Starke, FL; her children Amanda (Michael) Hardee of Starke, FL, and Dusty (Laura) Griffis of Lawtey, FL; her children’s father, Rodney Griffis; her sister Sonya (Andy) Baldree of Starke, FL; her brother, Dale (Erline) Tenly of Starke, FL; her grandchildren Jencie (Matt) Stanwix-Hay, Karlie Hardee, Tenly Hardee, Colby Griffis, and Ally Griffis; and her great grandson Ryker Stanwix-Hay. A Celebration of Kim’s Life will be held on Sunday, January 17, 2021, at 3:00 pm at First Baptist Church of Starke with Brother Wailon Haston officiating. The family will receive friends at the church an hour prior to the service. Arrangements are under the care and direction of V. Todd Ferreira Funeral Services and Archie Tanner Memorial Chapel, Starke, FL. 904-964-5757.

Landry &#8211; Kim Elaine Landry, age 61, of Starke, Florida, went to her heavenly home on January 13, 2021 at her residence in Starke with her loving family by her side. She was born in Starke, Florida, on March 1, 1959, to the late Edmond... View Obituary & Service Information

The family of Kim Elaine Landry created this Life Tributes page to make it easy to share your memories.

Send flowers to the Landry family.