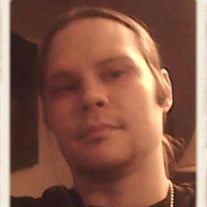 Joseph Richard Overbaugh was born March 2, 1984 to his mother Stephanie and father Randy in Kingston, New York. Joey died October 20, 2021 in Jacksonville, FL after a tragic accident. Joe grew up in Saugerties, NY. Played in the Saugerties Little League. Member of the Boy Scouts. Enjoyed wrestling. Was a member of a neighborhood “Extreme Trampoline Wrestling” and was known as “Juice”. He enjoyed camping with his family and going to the ocean. He was a collector of books and coins. Joe was always finding and rescuing animals, they had a way of finding him. He had a big heart and many friends and would do anything for anyone, even if it meant he went without. Joe and his brothers recently moved to Jacksonville, FL. He loved to go to the beach and “watch the people” and swim in the ocean. Joseph was predeceased by paternal grandparents Walter and Mary Overbaugh, Aunt Dianna Overbaugh, and paternal grandfather Dale Longtin. Joe is survived by his mother Stephanie (Steven) Doaner; father, Randy Overbaugh; brothers, Eric (twin), Matthew, and best friend and brother Zachary; maternal grandmother, Sarah McKeighan; aunts, Vanessa (Shaun) Ketcham and their children Mallory and Caitlyn, Sarah (John) Langlois, their children, William, Morgyn, Alex and Gracie; uncles, Judson Severy and his children Lexie and Devin, Aaron (Danielle) their children Adam and Lucas; paternal grandmother Phyllis Longtin; uncle, Danny Overbaugh; cousin, Jessica Overbaugh and her children Isabella and Addalyn; cousin, Jason Overbaugh; Joe’s good friend, second mother, Alice Berry of Ridgecrest, CA and the members of Desert Christian Fellowship and The Lighthouse Church which Joe was a baptized member. We cannot forget loyal and faithful dog Scooter who Joe rescued and saved and would follow Joe to the ends of the earth. Also, several extended family members and friends. In lieu of flowers please make a donation at a local animal shelter of your choice in Joe’s name. The arrangements are under the care and direction of V. Todd Ferreira Funeral Services at Beaches Memorial Park, 1500 Main Street, Atlantic Beach, FL 32233. 904-249-1166.

The family of Joseph Richard Overbaugh created this Life Tributes page to make it easy to share your memories.

Joseph Richard Overbaugh was born March 2, 1984 to his mother...

Send flowers to the Overbaugh family.