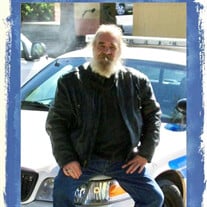 Knipp – Joseph Henry Knipp, age 73, of Hampton, Florida passed away on September 18, 2020 at the Custead Care Center in Orange Park, Florida. Joseph was born in Jersey City, New Jersey on May 11, 1947 to the late Joseph Harry Knipp and Sally Mathes. He was raised in New Jersey and graduated from Brick Township High School. After graduation, Joseph joined the United States Army where he proudly served his country for many years. While stationed in South Korea he met the love of his life, Incha “Kim”, and they were happily married on May 9, 1979. Shortly after their marriage, Joseph and Kim relocated to the United States in New Jersey. In 1987, they made Hampton, Florida their forever home. Joseph was a devoted husband, loving father, and grandfather. He enjoyed riding his motorcycle and fishing, but most of all, Joseph loved spending time with his grandkids. He was preceded in death by his parents; loving wife of 41 years, Incha “Kim” Knipp; brother, Bobby Knipp; and sister, Judith Knipp. He is survived by his children, P.J. (Wendy) Knipp of Keystone Heights, FL, Steven (Tressie) Knipp of Starke, FL, Joshua Knipp of Hampton, FL, Joseph (Lori) Knipp and Angela Knipp both of Mocanaqua, PA, and Robert (Elyse) Knipp of Hampton, FL; his grandchildren, Kaylen Knipp, Koleson Knipp, Klayton Knipp, Kentzie Knipp, Ethan Knipp, Adin Knipp, Joseph Hailey Knipp and Angelina Knipp; brother, Keith (Karla) Messineo of Toms River, NJ; and his sister, Bonnie (Robin) Hiner. A Graveside Celebration of Joseph’s Life will be held on Friday, September 25, 2020 at 10:30 am at Santa Fe Cemetery in Hampton, Florida where military honors will be rendered. Arrangements are under the care and direction of V. Todd Ferreira Funeral Services and Archie Tanner Memorial Chapel, Starke, Fl. 904-964-5757.

Knipp &#8211; Joseph Henry Knipp, age 73, of Hampton, Florida passed away on September 18, 2020 at the Custead Care Center in Orange Park, Florida. Joseph was born in Jersey City, New Jersey on May 11, 1947 to the late Joseph Harry Knipp and... View Obituary & Service Information

The family of Joseph Henry Knipp created this Life Tributes page to make it easy to share your memories.

Send flowers to the Knipp family.