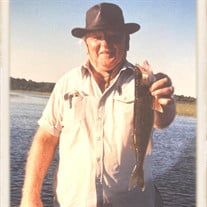 John Henry Johns, 85, passed away on Thursday, January 7th, 2021, at his home in Olustee, Florida. His son, Jim (Jamey), and Jim's wife, Ann who had lovingly and skillfully cared for him through his long illness were by his side. John Henry was born February 22nd, 1935, on the north side of Ocean Pond in Olustee. He was the 12th child of Jessie Oliver Johns and Sallie Nettles Johns who worked as sharecroppers. Mr. Johns spent 4 years in the Air Force serving on Seward Island in Alaska near the Russian Border and at the Atomic Testing Base in Mercury, Nevada. While serving in Minnesota he met Audrey Erickson Petersen, the mother of his four sons. They were married over 20 years. Mr. Johns worked several years for Sears and JC Penney's as their Automotive Manager. He worked 10 years for Baker County Schools in the Bus Garage before retiring. Some of Mr. Johns' favorite pastimes included Farming, Fishing, and enjoying his 1940 Ford Coupe Deluxe. John Henry will be greatly missed by his sons, John Quentin Johns (Quentin) of Henning, Minnesota; James Erickson Johns (Jim/Jamey) and wife Ann of Olustee, Florida; Wade Anthony Johns (Wade) of Roseau, Minnesota, and Jeffrey Jay Johns (Jeff) of Sydney, Australia. He is also survived by 3 grandchildren Michelle, Justin, and Megan as well as 8 great-grandchildren Nadya, Audrina, Daven, Layla, Scarlett, Addison, Selena, and Kira along with many nieces and nephews and loving friends. Memorial services will be held Thursday, January 14th, at 11 a.m. at the Church of Jesus Christ of Latter-day Saints, 904 South 5th Street, Macclenny, Florida 32603. Family members are invited to gather at 10 a.m. at the church. Bishop Breazeale will be officiating. Interment will follow the church activities at Olustee Cemetery 5113 Oliver Trail 32087. Pallbearers will be Quentin Johns, Wade Johns, James Johns, Ronnie Johns, Justin Johns and Mark Branson. Arrangements are under the care and direction of V. TODD FERREIRA FUNERAL SERVICES, 250 North Lowder Street, Macclenny, FL 32063 (904)259-5700. Visit www.ferreirafuneralservices.com to sign the family’s guest book.

John Henry Johns, 85, passed away on Thursday, January 7th, 2021, at his home in Olustee, Florida. His son, Jim (Jamey), and Jim's wife, Ann who had lovingly and skillfully cared for him through his long illness were by his side. John Henry... View Obituary & Service Information

The family of Mr. John Henry Johns created this Life Tributes page to make it easy to share your memories.

Send flowers to the Johns family.