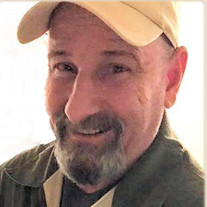 John Patrick Holler left us on May 10th, 2021 at the age of 56, in his hometown of Jacksonville, FL. He passed away peacefully at home in the hands of his family from prolonged health issues. Despite the pain, John showed nothing but strength and courage throughout his battle, while always having a smile on his face. John is survived by his beautiful wife, Asuncion Holler. He was a proud father to two children, Nathaniel Holler and Natalie Holler. Also, he was an amazing grandfather to Jaisingh McKenzie. John will be extremely missed by his family, siblings, nephews/nieces, aunts/uncles, extended family, and friends. He has been reunited with his mother Shirley DeCreamer who the family has lost in the most recent years as well as many other family members from past decades. John was born in Pekin, IL March of 1965 he grew up between there and Mequon, WI. But at an early age enrolled into the military. Serving in the United States Navy as a Damage Controlman for 26 years and retired as a Senior Chief. He has been on multiple tours traveling the world and has earned numerous awards throughout his career such as Sea Service Ribbons, Meritorious Unit Commendations, Battle “E”, Navy Expeditionary Medal, Armed Forces Expeditionary Medal, and many more. John was a very straight forward, loving, family man. He did anything to provide for his family. Simple he was, he loved his football, watching races, and listening to music. Most of the time you could not catch him without a Green Bay or racing cap on. Though he did not talk too much, he did love making people laugh. Anyone who knew John had their own special relationship with him. He was loved by many and will be missed dearly. This man loved his country and was a hard worker. He was selfless in many ways. All he wanted was to make sure everyone was okay. His Legacy will live on in many others. Mr. Holler at his wishes will be cremated and buried. There will be a closed in memorial service early October for family only. The Holler family would like to thank anyone who has reached out or kept John in their thoughts and prayers. The arrangements are under the care and direction of V. TODD FERREIRA FUNERAL SERVICES at Beaches Memorial Park, 1500 Main Street, Atlantic Beach, FL 32233. 904-249-1166.

John Patrick Holler left us on May 10th, 2021 at the age of 56, in his hometown of Jacksonville, FL. He passed away peacefully at home in the hands of his family from prolonged health issues. Despite the pain, John showed nothing but strength... View Obituary & Service Information

The family of John Patrick Holler created this Life Tributes page to make it easy to share your memories.

Send flowers to the Holler family.