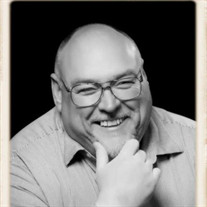 John Paul Austin, age 53, of Jacksonville, Florida passed away on August 4, 2021 at St. Vincent’s Medical Center Riverside. He was born in Morgantown, West Virginia on May 19, 1968 to Donald Ray Austin and the late Roberta June Vincent Austin. John was raised in West Virginia and graduated from East Fairmount High School in 1986. He met the love of his life, Patrice Ardery, while attending school and later married her on December 4, 1989. John has been a resident of Jacksonville the majority of his life. He worked various jobs until becoming employed at the Wal-Mart store in Macclenny in 1999 and was currently serving as their Asset Protection Assistant Store Manager. He enjoyed his career and loved his work family. He also enjoyed collecting comics, antiquing, cruising with Patrice, and most of all, spending time with his sweet granddaughter. They had a bond like no other. John was a devoted husband, loving father, grandfather, son, brother, and friend who will be missed by all who knew him. He was preceded in death by his mother, Roberta June Vincent Austin. John is survived by his loving wife of 31 years, Patrice Austin of Jacksonville, FL; sons, Brandon (Shannon) Austin and Eric Austin both of Jacksonville, FL; sisters, Virginia Le of Maryland and Melissa (Sylvester) Taylor of Jacksonville, FL; and his granddaughter, Willow Austin. A Celebration of John’s Life will be held on Monday, August 9, 2021 at Ferreira Funeral Services Chaffee Road Chapel at 1:00 pm with Pastor Ralph Flowers officiating. The family will receive friends on Monday an hour prior to the service at the funeral home. Arrangements are under the care and direction of Ferreira Funeral Services, 1320 Chaffee Road South, Jacksonville, FL, 32221, 904-378-7777. Visit www.ferreirafuneralservices.com to sign the family’s guest book.

John Paul Austin, age 53, of Jacksonville, Florida passed away on August 4, 2021 at St. Vincent&#8217;s Medical Center Riverside. He was born in Morgantown, West Virginia on May 19, 1968 to Donald Ray Austin and the late Roberta June Vincent... View Obituary & Service Information

The family of John Paul Austin created this Life Tributes page to make it easy to share your memories.

Send flowers to the Austin family.