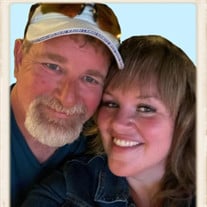 Yeauger- Jason Michael Yeauger, age 46, of Commerce City, Colorado passed away unexpectedly on August 13, 2021. He was born in Gallipolis, Ohio on September 9, 1974 to Peggy and Barry Yeauger. Jason served in the United States Air Force from 1992 to 1996. Jason was a loving husband, father, grandpa “Papoo” and friend. His pride and joy were wrapped up in his family. He had a renewed passion in life when he met his wife Susan 7 years ago. A devoted family man and friend, Jason would do anything for anyone. He had a big heart and was always quick to help a friend in need. Jason was also very much revered by management and his crew in his position as maintenance manager at ELS in Thornton, CO. Besides his family, Jason loved riding his Harley. He also loved working with his hands and could fix practically anything. Jason is preceded in death by his late wife of 22 years, Tina Yeauger, his paternal grandparents Marvin and Lucille Yeauger, and his maternal grandparents Andrew and Lucille Parsons. Jason is survived by his parents Barry and Peggy Yeauger, his loving wife, Susan Yeauger of Commerce City, CO; his son, Steven (Emilie) Yeauger of Starke, FL; his daughter, Whitney Yeauger of Starke, FL; his stepsons, Keith and Gavin Davis; his brother, Barry Alan (Dawnine) Yeauger; and his grandchildren, Jayden Goodman, Ethan Yeauger, Layla Yeauger, and Micah Jackson. A Celebration of Jason’s Life will be held on Monday, August 23, 2021 at 12:00 pm at Archie Tanner Memorial Chapel with Pastor Mark Ogle officiating. Interment will follow at Santa Fe Cemetery in Hampton, Florida. The family will receive friends an hour prior to the service at the funeral home. Arrangements are under the care and direction of V. Todd Ferreira Funeral Services and Archie Tanner Memorial Chapel, Starke, Fl. 904-964-5757. Visit www.ferreirafuneralservices.com to sign the family’s guest book

Yeauger- Jason Michael Yeauger, age 46, of Commerce City, Colorado passed away unexpectedly on August 13, 2021. He was born in Gallipolis, Ohio on September 9, 1974 to Peggy and Barry Yeauger. Jason served in the United States Air Force from... View Obituary & Service Information

The family of Mr. Jason Michael Yeauger created this Life Tributes page to make it easy to share your memories.

Send flowers to the Yeauger family.