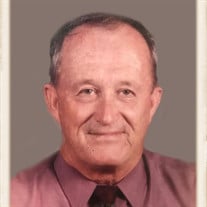 Ward – James “Jim” Ernest Ward, age 82, of Starke, Florida, went to his heavenly home on January 3, 2021 from an unexpected illness. He was born in Chiefland, Florida, on August 14, 1938, to the late Ernest Ward and Violet Arrington Ward. Jim graduated from Chiefland High School in 1956. Jim found his passion early in life and knew he was destined to be an educator. To achieve his dream of becoming a teacher, he earned a Bachelor of Science degree and a Master of Science degree from the University of Florida. Jim began his career teaching agriculture in 1960 at Bunnnell High School. He taught at Palatka High School until 1977 and continued there as the Assistant Principal until 1988. Jim relocated to Starke in 1988 and accepted the position as Director of the Bradford-Union Vo-Tech Center where he served until retirement in 2003. Jim loved kids and enjoyed helping his students grow into responsible adults. Jim will always be remembered as a visionary and true leader. He saw the potential the Vo-Tech had to educate our community and better those in it through programs he created for high school and adult students. Jim started the Performance Based Diploma program which enabled several hundred students to graduate high school while becoming a vocational program completer. For adults in the community, he started medical programs beginning with Certified Nursing Assistant. Several programs were added including Phlebotomy, Home Health Aide, Medical Coding, and finally Licensed Practical Nursing. He knew how to hire the right people for the right positions to make the programs prosper and grow. Jim’s philosophy was, we are only as good as the people we work with. Jim’s extensive knowledge about vocational funding was a key asset in receiving accreditation for the Bradford-Union Vo-Tech. Jim also stayed busy in his free time. He was a proud leader of the Future Farmers of America where he participated in the state winning livestock team, meat judging team, two state land judging teams, national vegetable judging team, a member of 14 state winning vegetable judging teams and State Farmers degree winner. Jim was named the Palatka Jaycees Outstanding Educator of the Year. He served as the president of the Florida High School Rodeo Team which won the National Championship in 1983 and 1984. He was the President of the Putnam County Fair Association from 1974 until 1984, and he was a member of the Starke Rotary and Kiwanis. He attended Madison Street Baptist Church. Jim was full of life and loved living it to the fullest. He enjoyed going to rodeos, hunting, fishing, being outdoors, and tending to his garden. Jim had a green thumb and was known for growing outstanding corn. His main love was his family. He especially enjoyed spending time with his grandchildren and attending their activities. He was preceded in death by his parents. Jim is survived by his loving companion and best friend of 23 years, Connie Wiggins of Starke, FL; his children, Troy (Melissa) Ward of Interlachen, FL, Stephen (Deedee) Ward of McDonough, GA, Greg (Jane) Wiggins of Afton, VA, Lance (Stefanie) Wiggins of Brooker, FL, and Charmin (Eric) Crawford of Lake Butler, FL; brother, Winston (Melba) Ward of Chiefland, FL; sister, Sue (Robert) Smith of Gainesville, FL; grandchildren, Ashton Ward, Andrew Ward, Clayton Ward, Grant, Gracen, Gabe, and Garrison Wiggins, Lindsey and Brooklyn Wiggins, Harlee, Falyn, and Eli Rimes, Christopher (Megan) Welch; great grandchildren, Ryker and Sawyer Welch; along with many extended family members and friends. A Celebration of Jim’s Life will be held on Thursday, January 7, 2021, at 2:00 pm at Madison Street Baptist Church with Pastor Jason Jones and Brother Richard Cason officiating. The family will receive friends at the church an hour prior to the service. In lieu of flowers, donations may be made to North Florida Technical College, 609 North Orange Street, Starke, FL 32091 for the Jim Ward Memorial Scholarship fund. Call North Florida Technical College for additional information. 904-966-6764. Arrangements are under the care and direction of V. Todd Ferreira Funeral Services and Archie Tanner Memorial Chapel, Starke, FL. 904-964-5757.

The family of James "Jim" Ernest Ward created this Life Tributes page to make it easy to share your memories.

Send flowers to the Ward family.