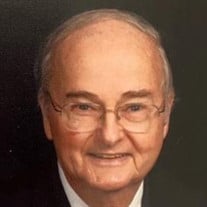 Doctor James Matthew Schaefer (“Jim”), 84, of Jacksonville, went home to be with The Lord on December 24, 2020. Doctor Schaefer was a friend to all that knew him and cared deeply for spreading the Gospel around the world. He was born in Rochester, New York on September 8, 1936. Bro. Jim was preceded in death by his parents, John Henry Schaefer, Sr & Julia Grace Simpson Schaefer as well as a brother, John Henry Schaefer, Jr. and grandsons, David & Billy. He leaves to cherish his memory his wife of 60 years, Lois A. Schaefer; his children and their spouses, Scott Hollenbeck (Crystal), Cindy Hollenbeck Dye, Steve Hollenbeck (Beth), Shelley Hollenbeck Krystowiak (Scott), Daniel Schaefer, Mark Schaefer, Ruth Schaefer Russell (Bill), Julia Schaefer Burleson (Mike), Paul Schaefer (Laura); 22 grandchildren, Daniel, Rachel, Joshua, Stephen, Tammy, Kim, Jennifer, Jessica, Brett, Brady, David, Alyssa, Steve, Amanda, Noah, Chelsea, Sheldon, Sean, Marissa, Matthew, Yuli Vanessa & Julian and 24 great-grandchildren. He graduated from East High School in Rochester, NY on June 10, 1954, studied music at Eastman School of Music, participated in the Rochester Inter High Choir and traveled with Evangelist Ray Martin. Jim earned a Bachelor of Arts in Bible from Bob Jones University in 1958 and Master of Arts in Christian Education (now known as Church Ministries) from Bob Jones in 1959. He was ordained to ministry at Bob Jones in 1960, later studied at Jacksonville University, had a Teacher Certification from 1966-2010 and received a Doctorate Degree in Educational Leadership in 2000. Dr. Schaefer served for 3 years at Blanding Boulevard Baptist Church as Music Director and as a Sunday School Teacher, taught school at Berea Baptist School and in public school for 6 years, was involved in Trinity Baptist Ministries for 45 years where he served as the Elementary School Principal for 25 years, was the head of the Department of Education and taught courses in education at Trinity Baptist College for 34 years, taught Sunday School, was the Director of Children’s Church, organized and wrote curriculum for both Sunday School and Children’s Church for grades 1-6. He served as the Trinity Youth Camp Director for grades 1-6 for many years and conducted seminars in various churches with Doctor Beebe and also on his own. Bro. Jim taught adult Sunday School at West Jacksonville Baptist Church, where he was a member, for a few years, and also set up curriculum for K- 6th grade, taught several courses at Global Baptist College and RU children for a short time, along with numerous other ministries and service through the years wherever he was called by God. Funeral services will be held at 11 AM Thursday, December 31, 2020 at Trinity Baptist Church, 800 Hammond Blvd., Jacksonville with his son Rev. Steve Hollenbeck and his Pastor Rodney Kelley officiating. The family will receive friends at the church from 10 AM until 11 AM prior to the service. Interment will follow at Gethsemane Memorial Gardens. The family has requested that in lieu of flowers, donations may be made to The Missions Fund at West Jacksonville Baptist Church, 5634 Normandy Blvd., Jacksonville, FL 32205. Arrangements by V. Todd Ferreira Funeral Services, 1320 Chaffee Road, South, Jacksonville, FL, 904-378-7777

Doctor James Matthew Schaefer (&#8220;Jim&#8221;), 84, of Jacksonville, went home to be with The Lord on December 24, 2020. Doctor Schaefer was a friend to all that knew him and cared deeply for spreading the Gospel around the world. He was... View Obituary & Service Information

The family of Dr. James Matthew Schaefer created this Life Tributes page to make it easy to share your memories.

Send flowers to the Schaefer family.