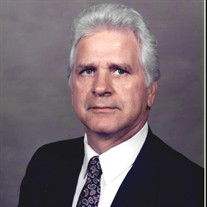 Rodgers –Reverend James G. Rodgers, age 80, of Glen St. Mary, Florida went to his Heavenly home on August 26, 2021 at his residence with his loving family by his side. He was born July 5, 1941 in Taylor, Florida to the late William Leroy Rodgers and Nettie Lee Dowling Rodgers. James was a lifelong resident of Baker County where he met the love of his life, Sherron Dugger, as a child. He graduated from Baker County High School in 1959 and married Sherron on March 11, 1961. He was saved by the grace of God and called into the ministry at a young age. His main passion in life was growing his relationship with his Lord and Savior, preaching the gospel, and showing God’s love to others. He graduated from Lee University with a Bachelors of Arts degree majoring in Business Administration. James was known for his loving compassion towards all people. He would always offer his assistance to those in need and would share the love of God. In ministry, Brother Rodgers was often called to struggling churches where he would rebuild them to thriving before continuing in his ministry. His many accomplishments included planting and building churches, parsonages, and fundraising for world and home missions. Brother Rodgers served as a Florida State Evangelist for many years and won the respect with his mentoring and benevolence towards pastors and their congregations. To round out his more than 50 years of ministry, Brother Rodgers served as Missionary to the Navajo and Lakota/Sioux Indian Nations. He first became involved with Native American ministries while pastoring. The Lord directed him into fulltime ministry with the Native American ministries for the remainder of his tenure. He retired after 50 years of faithful service, but continued to support Native American churches and pastors until his passing. James had a true gift from God to help and serve and he did just that. He enjoyed attending the Macclenny Church of God where he was member since 1967. James also enjoyed the time he was able to spend with family and friends. He was a devoted husband, loving father, grandfather, great grandfather, leader, son, brother, and friend who will be greatly missed by all who knew him. James was preceded in death by his parents; two brothers, George “Burris” Rodgers and Carlos “Buck” Rodgers; two sisters, Iris Grimmet and Margie Darnell; and his grandson, Jeremy L. Mason. James is survived by his loving wife of 60 years, Sherron Dugger Rodgers of Glen St. Mary, FL; children, Patricia Lynn (Rodney) Norman, Rhonda Rodgers Sloan, and Nancy N. (Nathan) Rochester; 3 grandchildren, James R. (Meranda) Norman, Nicole (Roger) Higginbotham, and Caitlin (Michael) Mason Kearley; and his great grandchildren, Avery, Madison, Mason, Corbitt, Claire, and Cason. A Celebration of James’s Life will be held on Thursday, September 2, 2021 at 12:00 pm at Christian Fellowship Temple with Pastor Rodney L. Norman, Pastor Shannon Conner, and Pastor James R. Norman officiating. Interment will follow at Taylor Cemetery. The family will receive friends on Thursday, from 11:00 – 12:00 pm at the church. Arrangements are under the care and direction of V. TODD FERREIRA FUNERAL SERVICES, 250 North Lowder Street, Macclenny, FL 32063 (904)259-5700. Visit www.ferreirafuneralservices.com to sign the family’s guest book.

Rodgers &#8211;Reverend James G. Rodgers, age 80, of Glen St. Mary, Florida went to his Heavenly home on August 26, 2021 at his residence with his loving family by his side. He was born July 5, 1941 in Taylor, Florida to the late William Leroy... View Obituary & Service Information

The family of Reverend James G. Rodgers created this Life Tributes page to make it easy to share your memories.

Send flowers to the Rodgers family.