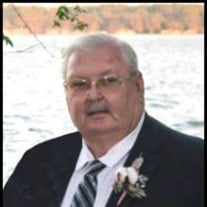 Knabb – James “Jim” Washington Knabb, Jr., age 74, of Macclenny, Florida passed away February 6, 2021 at Ed Fraser Memorial Hospital in Macclenny, Florida. He was born January 1, 1947 in Jacksonville, Florida to the late James Washington Knabb, Sr. And Helen Sakorafas Knabb. Jim was a lifelong resident of Baker County and a longtime member of Glen Baptist Church. He was a jack of all trades and started work at an early age. While in school he ran track, played football, and worked in a family saw mill, a trade his family has passed down from generation to generation. Jim also met the love of his life, Constance Diann Bennett, while in school. He graduated from Baker County High School in 1965 and went to Lake City Community College for a short time, until he joined the United States Army where he proudly served his country. On September 16, 1967, Jim and Connie were happily married and have enjoyed 53 years of marriage. Jim was a devoted husband, loving father, grandfather and great grandfather. After many dedicated years in the timber industry - working with pulpwood, cruising timber, and logging - he became the President at Knabb Lands and Labeuna Farms where he served until retirement in 2019. Jim was active in the community and his church. He was most passionate about his time with Carpenters For Christ, which was a ministry where he traveled to assist in building churches. He gave his time and his God-given skills to help others. Jim not only helped to build churches, but many homes for his family and friends. In his free time, he coached Little League Baseball and Football, was a Wildcat Booster Club member, and was the President at the Baker County Bass Master’s of Macclenny. Jim was the proud winner of the 1992 Angler of the Year Award and truly enjoyed the peaceful atmosphere of fishing. More than anything, Jim was a family man and loved his entire family dearly. Jim was preceded in death by his parents and his brother-in-law, Sam Truluck. Jim is survived by his loving wife of 53 years, Connie Knabb of Macclenny, FL; children, Kimberly (Troy) McCullough, Jason (Amy) Knabb, and James Washington (Jennie) Knabb, III all of Macclenny, FL; brother, George (Jeannie) Knabb of Macclenny, FL; sisters, Joyce Truluck and Diane (Tom) Dorman both of Macclenny, FL; grandchildren, Tara (Shayne) Stenbeck, Tucker McCullough, Taytum (Tyler) Rose, Savannah (Jarrell) Rodgers, Madison (Brad) Stone, James Washington Knabb, IV, Jase Knabb, Jett Knabb, Malorie Pippins, and Jolton Knabb; and great grandchildren, Jonz Stenbeck, Ollis Stenbeck, Talbot Rose, Palmer Rodgers, Truett Rose, and Sawyer Stone; along with many extended family members and friends. A Celebration of Jim’s Life will be held on Wednesday, February 10, 2021 a 3:00 p.m. at Glen Baptist Church with Pastor Chas Rowland Officiating. Interment will follow at Woodlawn Cemetery. The family will receive friends on Wednesday, February 10, 2021 an hour prior to the service at the church. Social distancing and masks are encouraged. Arrangements are under the care and direction of V. TODD FERREIRA FUNERAL SERVICES, 250 North Lowder Street, Macclenny, FL 32063 (904)259-5700. Visit www.ferreirafuneralservices.com to sign the family’s guest book.

The family of Mr. James Washington Knabb Jr. created this Life Tributes page to make it easy to share your memories.

Send flowers to the Knabb family.