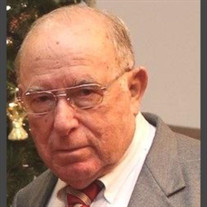 Pastor James Edward “Jim” Ritch, 86, of Jacksonville, went home to be with The Lord on April 14, 2021. He was born in Jacksonville, Florida on February 12, 1935. He married Terry Barbara Jean White on October 26, 1956. He served in the United States Marine Corp from 1953-1955. He was proud to have served as a member of the Marine Corp and honored the Marines throughout the rest of his life. Following his military service, he returned to his home in Jacksonville and went to work for Seaboard Coastline Railroad as an electrician. He met and married his wife, Terry, and their son, Mike, and daughter, Penny, completed their family. He led his family in serving the Lord as he and Terry were active members of Beaver Street Baptist Church. While working at the railroad and serving as a layman in church, he received and answered God’s call into the ministry. He went to Baptist Bible College in Springfield, Missouri in 1966 to prepare for the pastorate. While in school, he pastored Marionville Baptist Church. After graduating from BBC in 1968, he remained in the ministry for almost 50 years serving as • pastor Moline Baptist Church in Moline, Illinois, • Associate Pastor of Jacksonville Baptist Temple in Jacksonville, Florida, • pastor of Victory Baptist Church in Maryville, Tennessee, • pastor of Sterling Baptist Church in Brunswick, Georgia, and • pastor of Hunter Park Baptist Church in Jacksonville, Florida. His ministry is distinguished by the strength of his teaching, his love of preaching, his dedication to serving God, and his desire to see the lost saved and grow in the Lord. He was preceded in death by • his parents James Perry Ritch and Mattie Lane Ritch McCormick, • 4 sisters – Dorothy Johns, Dora Manchester, Helen Chadwick, and Betty Weldon – and • a grandson, Phillip Michael Ritch. Survivors include his wife of 64 years, Terry W. Ritch; son, Mike Ritch (Norma Jean) and daughter, Penny Cox (Dewey). Memorial services will be held at 11 AM Tuesday, April 20, 2021 at West Jacksonville Baptist Church, 5634 Normandy Boulevard, Jacksonville with Pastor Rodney Kelley officiating. For those who prefer, donations may be made to Community Hospice. Arrangements are under the care and direction of Ferreira Funeral Services, 1320 Chaffee Road South, Jacksonville, FL, 32221, 904-378-7777. Visit www.ferreirafuneralservices.com to sign the family’s guest book.

The family of Pastor James "Jim" Edward Ritch created this Life Tributes page to make it easy to share your memories.

Send flowers to the Ritch family.