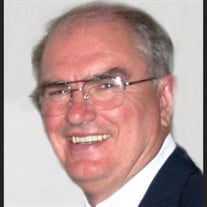 Schneider - Gene Joseph Schneider, age 77, a loving husband and father of two children, passed away on November 2, 2020, secondary to Covid-19 at Ed Fraser Memorial Hospital in Macclenny, Florida. Gene was born on May 20, 1943 in Fond du Lac, Wisconsin to Joseph and Ruby (Freund) Schneider, the eldest of three children. Gene grew up in Johnsburg, Wisconsin where he received a parochial education at the local Catholic High School, St. Mary Springs Academy. His father owned and operated an automotive repair garage in a neighboring town, and following his high school graduation in 1961, Gene pursued an education in Television and Radio Communications. He enlisted in the United States Army in 1964, and proudly served his country, stationed at Ft. Huachuca. Following his honorable discharge, Gene continued his career in the radio industry working at radio stations in West Bend, Wisconsin and Ocala, Florida. He was an active member of his community throughout his life, including Kiwanis Club, the Appleton Museum of Art in Ocala, and enjoyed the local amateur theatre productions. His community involvement continued recently with his attendance at the “Black Lives Matter” protests with his daughter, Kendyl and his wife, Dr. Patricia Jones. Gene had a lifelong passion and proficiency for outdoor photography, developing his photos, and a penchant for collecting antique cameras. He treasured classic automobiles, train memorabilia, and early radio equipment, and appreciated the transition to more modern instruments. Gene was an avid fan of the Milwaukee Brewers baseball team and the Green Bay Packers football team, both of Wisconsin. He enjoyed playing baseball during his youth, which transitioned to golf after his relocation to Florida during the 1980’s. He became a dedicated and ardent golfer in Florida with its abundance of golf courses and putting greens and an enthusiastic reader in his retirement. Gene loved meeting people and cultivated friendships readily by virtue of being an excellent listener who was genuinely interested in other people’s stories and lives. Perhaps above anything else, Gene cherished those times he was in the company of his family, savoring those opportunities he had to share in the companionship of his grandchildren and children as he observed them developing into the fine young people they are today. He was immensely proud of the achievements of both his children and grandchildren. He was preceded in death by his parents, Ruby and Joseph Schneider; his first wife, Kathy Kearns; and his second wife, Betty Little. Gene is survived by his loving wife of 25 years, Dr. Patricia A. Jones of Macclenny, FL; daughters, Joelle (Thor) Curcio and Kendyl Schneider; grandchildren, Gunnar and Connor; brother, John (JoAnn Stephany) Schneider; and sister, Bonnie (Kevin) Hirsch. A Celebration of Gene’s Life will be held on Wednesday, November 25, 2020 at 2:00 p.m. at V. Todd Ferreira Funeral Services Chapel with Father Richard Rasch as celebrant. In lieu of flowers, his family asks that you take a walk on the beach or in your neighborhood holding hands with your loved ones; spend time with your pets, or take a few moments every day to recognize how very fortunate you are to have enduring friendships. This is what Gene would have wanted. The arrangements are under the care and direction of V. TODD FERREIRA FUNERAL SERVICES, 250 North Lowder Street, Macclenny, FL 32063 (904)259-5700. Visit www.ferreirafuneralservices.com to sign the family’s guest book.

The family of Mr. Gene Joseph Schneider created this Life Tributes page to make it easy to share your memories.

Send flowers to the Schneider family.