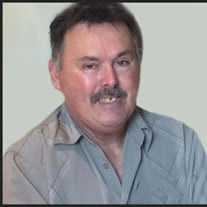 Rigdon- Frank “Frankie” Thomas Rigdon, Jr., age 63, of Macclenny, Florida passed away peacefully in his home on December 20, 2020. He was born on October 9, 1957 in Jacksonville, Florida to the late Frank Thomas Rigdon, Sr. and Shirley LaFlash Rigdon. Frankie was a jack of all trades. He started working at a young age with his father in the air conditioning business and after high school opened his company, All Purpose Pallets in Jacksonville. Frankie met the love of his life, Dana Hollingsworth, in 1975 and they were happily married on December 1, 1984. After they were married, Frankie and Dana moved to Macclenny, Florida and made Baker County their home. Frankie was an entrepreneur and very talented with wallpaper and mural hanging. He was the proud owner of Frank’s Wallpaper Hanging and enjoyed his career in the wallpaper industry. Frankie also worked a few years in construction at Shands Hospital in Jacksonville. Frankie was known for his kind heart and love of helping others. He would check on his neighbors to see if there was anything they needed and was always finding ways to help. Frankie had many hobbies throughout the years. He enjoyed hunting, fishing, horseback riding, team penning, gardening, farming, dirt track racing, and tending to all his animals, dogs, cats, and horses. He will always be remembered for being a Jokester, bringing smiles to family and friends, and for his talents in welding, woodworking, heating and air, and wallpaper hanging. Most of all, Frankie loved his family and enjoyed spending time with them. He was preceded in death by his parents; sister, Selena McGowan; and brother-in-laws, Terry McGowan and Daryl Hollingsworth. Frankie is survived by his loving wife of 36 years, Dana B. Rigdon of Macclenny, FL; brother, Alton Leonard Rigdon of Jacksonville, FL; sisters, Pamela (Ron) Fore of Fleming Island, FL, and Janie (J.T.) DeVan of Orlando, FL; and many extended family members who Frankie loved. The family will cherish Frankie’s memory in their home at a later date. Arrangements are under the care and direction of V. Todd Ferreira Funeral Services, 250 North Lowder Street, Macclenny, FL 32063 904-259-5700. Visit www.ferreirafuneralservices.com to sign the family’s guest book.

The family of Mr. Frank Thomas Rigdon Jr. created this Life Tributes page to make it easy to share your memories.

Send flowers to the Rigdon family.