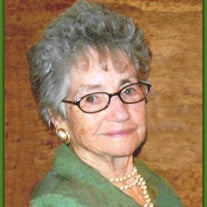 Sirmans &#8211; Esther Irene Sirmans, age 96, of Macclenny, Florida passed away August 2, 2020 at her home with family by her side. She was born October 15, 1923 in Baker County, Florida to the late Russell Sullivan Hodges and Katie Bell Harvey... View Obituary & Service Information

The family of Ms. Esther Irene Sirmans created this Life Tributes page to make it easy to share your memories.

Send flowers to the Sirmans family.