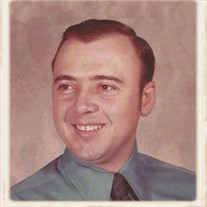 Corbin – Douglas “Doug” Arnold Corbin, age 75, of Starke, Florida passed away on November 6, 2020 at Malcom Randall VA Medical Center in Gainesville, FL. Doug was born in Indianapolis, Indiana on August 25, 1945 to the late Louis Corbin and Crystal Brown Corbin. Doug was raised in Indianapolis where he graduated from Arsenal Technical High School. Shortly after school, Doug joined the United States Navy where he proudly served his country until retiring on June 30, 1984. Later, Doug moved to Virginia and later relocated to Starke, FL where he has spent the past 20 years. Doug enjoyed mechanics and tinkering with many different things. Most of all Doug loved his family, especially his grandkids. Doug will be dearly missed by all who knew him. He was preceeded in death by his parents; his sons, Michael Alan Corbin, Wiley Matthews-Corbin; and his brothers, Keith, and Walter Corbin. Doug is survived by his children, Rickey Matthews, Robert Corbin both of Starke, FL, Kim (Joseph) Maniscalco of Panama City, FL, Vicki (Rockwell) Roberts of High Springs, FL, and April Montroy of Starke, FL; his sister, Brenda Handrick of Knightstown, IN; his grandchildren, Tyler, Kaylee, and Nicole Corbin all of Starke, FL. A Graveside Celebration of Doug’s Life will be held on November 11, 2020 at 1:00 p.m. at Crosby Lake Cemetery with Pastor Dan Search officiating. Arrangements are under the care and direction of V. Todd Ferreira Funeral Services and Archie Tanner Memorial Chapel, Starke, Fl. 904-964-5757. .

The family of Douglas Arnold Corbin created this Life Tributes page to make it easy to share your memories.

Send flowers to the Corbin family.