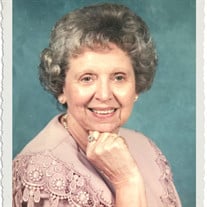 OBITUARY FOR DOROTHY L. HATTAWAY HAYES January 2, 1926 – August 9, 2020 Dorothy L. Hattaway Hayes, age 94, of Largo, Florida passed away from this earth and entered her Heavenly Home Sunday morning, August 9, 2020. She was a resident of Tierra Pines Center Nursing Home in Largo. Dorothy was born and raised in Glen St. Mary, FL. She moved to Jacksonville for a time after marrying James A. Hattaway before returning to Glen. After the death of James, she married William “Preacher” Hayes until he passed away, then she moved to Largo to be near her daughter Donna where she remained until her final move to her Heavenly Home. Dorothy was a longtime member of Manntown CH Church and a frequent attender in many churches in the Largo areas as she was able. Dorothy was the daughter of Auzzie Combs and Minnie Aultman Combs of Glen St. Mary, FL. All of her sisters and brothers preceded her in death – Floria (Hodges), Laura (Raulerson), Robert Combs, Everett Combs, and Arlie Combs. Also preceding her in death was her son Richard A. Hattaway. She is survived by her daughter, Donna L Yakopovich (Mike) of Largo, FL and son, A. Eugene Hattaway (Beth) of Kingston, TN. There are 3 grandchildren, and 9 great grandchildren. The Coronavirus has caused us to have to alter Mother’s plans for her final home going celebration. She is dressed in her Sunday best for the celebration and we would invite you to stop by Ferreira Funeral Home Tuesday, August 18, 2020 from 5:00 – 7:00 p.m. to see her. Regretfully, Donna, Mike, Beth, and Eugene will not be able to make the trip to greet you but, her pastor, Steve Blackmon will be there to greet you and share a devotion and prayer together. There will not be a chapel or graveside service. The family will plan, at later time, a celebration of remembrance. Arrangements are under the care and direction of V. Todd Ferreira Funeral Services, 250 North Lowder Street, Macclenny, FL 32063 904-259-5700. Visit www.ferreirafuneralservices.com to sign the family’s guest book.

The family of Ms. Dorothy Lee Hayes created this Life Tributes page to make it easy to share your memories.

Send flowers to the Hayes family.