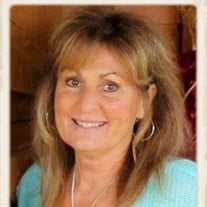 Diane Marie Henkel, age 67, of Orange Park, Florida went to her Heavenly home on July 29, 2021 at her residence with her loving family by her side. Diane was born in Queens, New York on August 20, 1953 to her loving parents, Edward Garopolo and Doris Radu Garopolo. She was raised in Long Island and graduated from East Islip High School in 1971. Diane met the love of her life, Lawrence Henkel, while attending high school. On April 20, 1974, Diane and Lawrence were happily married. They resided in Long Island the majority of their life where they raised their sweet daughters, Dana and Kristal. In 2011, Diane and Lawrence relocated and made Orange Park, Florida their forever home. Diane was a loving daughter and sister, devoted wife, mother, and grandmother. She enjoyed being a homemaker, tending to her family, and loving on her grandbabies. Diane was passionate about serving her Lord and Savior and enjoyed being an active member at Elevate Life Church. She also enjoyed baking and shopping, but more than anything, Diane loved her family and enjoyed spending time with them. She was preceded in death by her father, Edward Garopolo and her brother, Michael Garopolo. Diane is survived by her loving husband of 47 years, Lawrence Henkel of Orange Park, FL; daughters, Dana (Michael) Gayda and Kristal (Tim) Staier both of Orange Park, FL; mother, Doris Garopolo of Fleming Island, FL; brothers, Steven Garopolo of Orange Park, FL and Edward James Garopolo of Jacksonville, FL; sisters, Susan (Scott) Dunn and Janice Garopolo both of Fleming Island, FL; grandchildren, Dylan Mirabella, Noah Staier, Abigail Staier, Elijah Staier, Micah Staier, and Skylar Gayda; along with numerous extended family and friends Diane loved dearly. A Celebration of Diane’s Life will be held on Tuesday, August 3, 2021 at 11:00 am at Elevate Life Church with Pastor Tim Staier officiating. The family will receive friends on Monday, August 2, 2021 from 6:00 – 8:00 pm at the church. In lieu of flowers, please make donations to https://www.paypal.com/donate/?cmd=_s-xclick&hosted_button_id=GHJPGYJ7AGVXC in Diane’s honor. Arrangements are under the care and direction of Ferreira Funeral Services, 1320 Chaffee Road South, Jacksonville, FL, 32221, 904-378-7777.

Diane Marie Henkel, age 67, of Orange Park, Florida went to her Heavenly home on July 29, 2021 at her residence with her loving family by her side. Diane was born in Queens, New York on August 20, 1953 to her loving parents, Edward Garopolo... View Obituary & Service Information

The family of Diane Marie Henkel created this Life Tributes page to make it easy to share your memories.

Send flowers to the Henkel family.