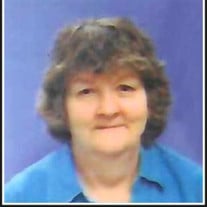 Henderson – Deborah Lee Dockery Henderson, age 65, of Glen St. Mary, Florida passed away on September 6, 2021 at Community Hospice Earl B. Hadlow Center for Caring in Jacksonville, Florida. She was born October 11, 1955 in Atlanta, Georgia to the late Roy Luther Dockery and Catherine Davis Dockery. Deborah was raised in Georgia and Florida and graduated from Sandalwood High School in Jacksonville in 1972. Following school, Deborah joined the United States Army where she proudly served our country for 10 years and 3 months. During her military career, she traveled from Germany, California, Indiana, back to Germany, and finally settled in Jacksonville in 1988. She was dedicated to her country and enjoyed her time in the service. After her honorable discharge from the military, Deborah used skills she had obtained to be an Executive Secretary at Crowley International Shipping where she was employed over 15 years until her retirement. Deborah was a proud mother of 2 daughters, and she always put her daughters and their needs first. She was an active Girl Scouts Leader and Area Coordinator for the Westside of Jacksonville for 8 years and also a Boy Scouts Leader for her grandchildren. She was proud to raise her grandson as an Eagle Scout. She also enjoyed being a member of the Baker County Veteran’s Counsel where she was instrumental in the Fishing Derby and loved dressing up as a Minion for all the children. She truly had an amazing heart and loved her family and friends dearly. Deborah was preceded in death by her parents; sisters, Rebecah Dockery and Cora DeWitte; and brother, Jimmy DeWitte. Deborah is survived by her loving daughters, Rebbeccah (Aaron Beatty) McElroy of Glen St. Mary, FL and Amber Gulley of Lake City, FL; brothers, Lloyd “Mark” Dockery of Jacksonville, FL, Philip and Scott DeWitte both of Bremen, GA; sisters, Sheilah (Raymond) Knapp of Sanderson, FL, Ivey Dockery of Ransomville, NY, and Darlene Dockery Lemcoe of Roswell, GA; 8 grandchildren; and Dear Friend, Richard (Paula) Henderson; along with numerous nieces and nephews. A Memorial Celebration of Deborah’s Life will be held on Monday, September 13, 2021 at 11:00 a.m. at V. Todd Ferreira Funeral Services Chapel with Dr. Chas Rowland officiating. Arrangements are under the care and direction of V. TODD FERREIRA FUNERAL SERVICES, 250 North Lowder Street, Macclenny, FL 32063 (904)259-5700. Visit www.ferreirafuneralservices.com to sign the family’s guest book.

The family of Ms. Deborah Lee Dockery Henderson created this Life Tributes page to make it easy to share your memories.

Send flowers to the Henderson family.