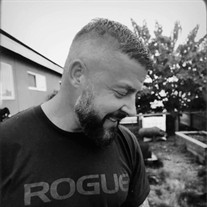 Hall – David “Dave” Lee Hall, age 47, of San Diego, California passed away on October 12, 2020 at his childhood home in Graham, Florida. He was born in Gainesville, Florida on June 8, 1973 to the late William Hall and Sharon Cain Hall. Dave was raised in Graham, Florida and graduated from Bradford High School in 1991. Shortly after high school, Dave joined the United States Navy and relocated to San Diego, California where he was stationed. He was very determined, driven to succeed, and was one of the youngest men to become a Navy SEAL. Dave graduated from BUD/S Training Class 189. He completed four platoons at SEAL Team FIVE and was known for his wit, performance, high standards, and love for protecting his country. Dave spent five years at a Special Mission Unit and deployed multiple times to Middle East combat zones. Following his retirement, Dave continued to work in the Defense Industry where he was able to use his unique skills, consulting for counter-insurgency operations. In 2011, Dave met the love of his life, Misti Lynn Pace, and they were happily married on August 27, 2011. Dave was a devoted husband, loving father, brother, and a faithful friend. He was loved by all who knew him and will missed by many. He was a true outdoorsman who loved anything adventurous; rock climbing, riding motorcycles and dirt bikes, free diving, spear fishing, and survival training. He also enjoyed world traveling, Philosophy, and collecting Rogue t-shirts. Dave was currently studying Philosophy with plans to transfer to the University of California in San Diego. More than anything, Dave was passionate about his family and enjoyed spending time with them. He was preceded in death by his parents and his sister, Pamela Hall. Dave is survived by his loving wife of 9 years, Misti Hall of San Diego, CA; his son, Ethan of San Diego, CA; brother, Tracy Hall of Malone, FL; aunt, Brenda (Billy) Bell of Graham, FL; uncle, Robert Cain of Graham, FL; cousin, Holden Bell; his 14 year Dutch Shepherd companion, Draco Hall; along with numerous extended family members, Navy SEALS brothers, and friends. A Celebration of Dave’s Life will be held on Friday, October 23, 2020 at 3:00 pm at Sampson City Church of God with Brother John Frampton officiating. Family and friends are welcome to process to the Bradford Sports Farm where a continued Celebration of Dave’s Life will be held. Arrangements are under the care and direction of V. Todd Ferreira Funeral Services and Archie Tanner Memorial Chapel, 14397 US Highway 301 South, Starke, FL 32091, (904) 964-5757.

The family of David Lee Hall created this Life Tributes page to make it easy to share your memories.

Send flowers to the Hall family.