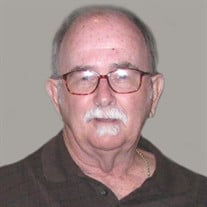 Gobin – Clarence Harvey Gobin, Jr., age 73, of Waldo, Florida passed away on April 13, 2020 at the VA Medical Center in Lake City, Florida. Harvey was born in Pittsburgh, PA on November 26, 1946 to the late Clarence Harvey Gobin, Sr. and Eilene Donoughe Gobin. Harvey was raised in Pennsylvania and moved to Florida in 1955. He graduated from Manatee High School in Bradenton in 1965 and shortly after joined the United States Air Force where he proudly served for 3 years, 3 months, and 28 days during the Vietnam War. He was proud of his career as a Salesman where he worked many years in the sales industry. Later in life, Harvey furthered his education by earning his bachelor’s degree in advertising at the University of Florida. Harvey was an avid Pittsburgh Steelers fan and Florida Gator fan who enjoyed collecting stamps, autographs, bats, helmets, shirts, and baseballs. He also enjoyed traveling the world. He went to Europe, Canada, Great Britain, Wales, France, Alaska, and went on many cruises and trains across the United States. Harvey also went to Disney World a few times a year. More than anything, Harvey loved his family and enjoyed spending time with them. Harvey is survived by his brothers, Brian and Larry Gobin of Bradenton, FL; his sister, Renee’ Gobin of Bradenton, FL; his nephew, Vincent Gobin; and his longtime companion of 28 years, Vivian Horten. A Celebration of Harvey’s Life will be held on Tuesday, April 21, 2020 at 11:00 am at Archie Tanner Memorial Chapel where military honors will be rendered. The family will receive friends an hour prior to the service at the funeral home. Interment will be at Florida National Cemetery in Bushnell, FL. Arrangements are under the care and direction of V. Todd Ferreira Funeral Services and Archie Tanner Memorial Chapel, Starke, Fl. 904-964-5757.

The family of Mr. Clarence Harvey Gobin Jr. created this Life Tributes page to make it easy to share your memories.

Send flowers to the Gobin family.