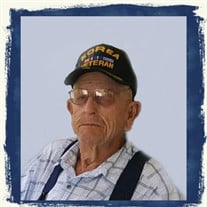 Gibson – Clarence Robert Gibson, Sr., age 86, of Lawtey, Florida went to his heavenly home on Sunday, March 15, 2020 at E.T. York Care Center in Gainesville with his loving family by his side. He was born in Commerce, Georgia on May 1, 1933 to the late Noah Gibson and Leila Cain Gibson. Clarence was raised in Polk County, Florida and joined the United States Army shortly after attending high school. He proudly served his country from 1953-1955 during the Korean War. After his honorable discharge from the military, Clarence started his longtime career at Atlantic Coastline Railroad as a Brakeman. Clarence met the love of his life, Joyce Wells, and they were happily married on February 18, 1956. He was a devoted husband and loving father to his four children. In 1998, Clarence retired from CSX after over 40 years of dedicated service as a Truck Driver. Clarence and Joyce have resided in Lawtey for the past 39 years where they were members of Morgan Road Baptist Church. He was also a member of the American Legion Post 56 in Starke and the Union B.R.A.C. in Jacksonville. Clarence was a people person who loved his family, enjoyed traveling, riding in his truck, and raising cows. He was an avid Georgia Bulldog fan and liked watching NASCAR racing. Throughout the years, Clarence was known as “Hoot”, “Chuck”, and “Pops”, but most of all he will be remembered as the most loving husband, father, and grandfather. He was preceded in death by his parents and his brother, Virgil Gibson. Clarence is survived by his loving wife of 64 years, Joyce Gibson of Lawtey, FL; his children, Sandy Helms of Plant City, FL, Terry Jackson of Lawtey, FL, C.R., Jr. of Possum Trot, FL, and Steve (Elizabeth) Gibson of Hampton, FL; sister-in-law, Lucy Gibson of Mulberry, FL; 9 grandchildren, Amanda, Krissy (Mark), Nick (Kirstie), Noah, Greer, Terry, Emily, Isaiah, Delanie; 2 great grandchildren, Sydney and Levi; along with many nieces and nephews. A Celebration of Clarence’s Life will be held on Friday, March 27, 2020 at 11:00 am at Morgan Road Baptist Church with Pastor John DeHoff officiating. Interment will be held at Florida National Cemetery in Bushnell, FL at a later date where military honors will be rendered. The family will receive friends on Thursday, March 26, 2020 from 6:00-8:00 pm at the funeral home. Arrangements are under the care and direction of V. Todd Ferreira Funeral Services and Archie Tanner Memorial Chapel, Starke, Fl. 904-964-5757.

Gibson &#8211; Clarence Robert Gibson, Sr., age 86, of Lawtey, Florida went to his heavenly home on Sunday, March 15, 2020 at E.T. York Care Center in Gainesville with his loving family by his side. He was born in Commerce, Georgia on May 1,... View Obituary & Service Information

The family of Mr. Clarence R. Gibson Sr. created this Life Tributes page to make it easy to share your memories.

Send flowers to the Gibson family.