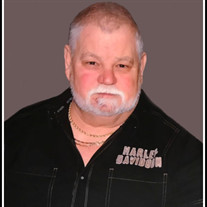 Adams – Charles David “Dave” Adams, age 70, of Sanderson, Florida passed away on July 24, 2021 at the Malcom Randall VA Medical Center in Gainesville. He was born on July 16th in Knoxville, Tennessee. Dave was raised in Tennessee and relocated to Jacksonville, Florida in 1968. He was drafted into the United States Army in 1971 and proudly served during the Vietnam War. After his honorable discharge from the military, Dave started his longtime career as a Truck Driver. He drove for Coca Cola, Triple CCC Carriers, Signal Delivery Service, and then purchased his first semi-truck which helped him to start his own company. He was the owner and operator of Triple C Transportation, Inc. for over 20 years. When he wasn’t working, he could be found riding his Harley Davidson motorcycle, hunting, or spending time with family and friends. Dave was a member of Christian Fellowship Temple and had a passion for his Lord and Savior. He was also very patriotic, proud to be an American, and loved his home country the United States of America. Dave enjoyed playing solitaire and keeping up with his social media account on Facebook, but more than anything, Dave was a family man who loved all his family and friends dearly. He was preceded in death by his parents, Charles and Molly Adams; and many siblings. Dave is survived by his loving companion of many years, Deborah Adams of Sanderson, FL; his daughters, Missy (Randy) Durrence of Sanderosn, FL, Sissy Adams of Jacksonville, FL, and Lisa (Gary) Christmas of Davidson, NC; brother, Bill (Bridget) Geames of Loudon, TN; sister, Christie Crowe of Seymour, TN; grandchildren, Whitney (Troy) McDowell, Bridget (Thomas) Yost, Kaylee Christmas, Veronica Leigh Adams, Ryan Smith, Christian Smith, Zara Adams, and Zachery Adams; and five great grandchildren. A Celebration of Dave’s Life will be held on Friday, July 30, 2021 at 11:00 am at Christian Fellowship Temple with Pastor David Thomas officiating. Interment will follow at Macedonia Cemetery. The family will receive friends on Thursday, July 29, 2021 from 6:00 – 8:00 pm at the church. Arrangements are under the care and direction of V. TODD FERREIRA FUNERAL SERVICES, 250 North Lowder Street, Macclenny, FL 32063 (904)259-5700. Visit www.ferreirafuneralservices.com to sign the family’s guest book.

The family of Mr. Charles David "Dave" Adams created this Life Tributes page to make it easy to share your memories.

Send flowers to the Adams family.