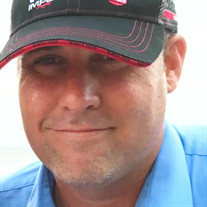 Chad Jeramy Davidson, age 42, loving father of Emily and Molly, of Jacksonville, Florida went to be with the Lord on August 8, 2021. Chad was born in Elyria, Ohio on March 20, 1979 and raised in Atlantic Beach, Florida with strong Catholic roots. After graduating from Fletcher High School, Chad started his career as a lineman at Beaches Energy. Chad loved being silly, singing, dancing and cracking jokes. He never met a stranger and would receive great joy by helping others or making them smile. He would give you the shirt off his back. Chad took pride in being a simple man, satisfied with the little things in life such as a new hat or shirt which could last him over a year. Above anything else, his main passion, love, and happiness came from his sweet daughters and his family. Chad enjoyed any and all time he had with his girls, as they were the beat in his heart. Left to mourn an enormous loss, are Chad’s daughters, Emily and Molly, and their mother Katie; his parents, James Davidson and Tammy Osborne Davidson; his sister Katy Davidson; his brother, Keith (Helen) Davidson; nieces and nephew, Evelyn, Jack and Emma; his childhood best friend Tione (Michele) Hunter; and a host of aunts, uncles, cousins and friends both locally and of Wellington, Ohio. A private mass honoring Chad’s life will be held on Tuesday, August 17, 2021 at 2:00 pm at Holy Family by the Sea Chapel with Father James O’Neal. Interment will follow at Beaches Memorial Park. Chad’s family has created a special account for his daughters. In lieu of flowers, a contribution for his girls’ future can be sent to routing no. 256074974, account no. 3152658500. The arrangements are under the care and direction of V. TODD FERREIRA FUNERAL SERVICES at Beaches Memorial Park, 1500 Main Street, Atlantic Beach, FL 32233. (904) 249-1166. Visit

Chad Jeramy Davidson, age 42, loving father of Emily and Molly, of Jacksonville, Florida went to be with the Lord on August 8, 2021. Chad was born in Elyria, Ohio on March 20, 1979 and raised in Atlantic Beach, Florida with strong Catholic... View Obituary & Service Information

The family of Chad Jeramy Davidson created this Life Tributes page to make it easy to share your memories.

Send flowers to the Davidson family.