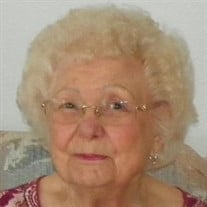 CECIAL ELLEN (MIMS) BRIM ARNDT, 96, was received into the fullness of God's glory on Monday, November 23, 2020 in Port Charlotte, Charlotte County, Florida, with her loving daughter by her side. Cecial was born on January 5, 1924 in Bithlo, Orange County, Florida, the daughter of James Newton Mims and Allie Irene (Nash) Mims. Cecial's father was a foreman for a lumber mill and the family moved from Bithlo to LaBelle and possibly other communities following the timber business. About age 10, the family which included an older brother, Clyde, younger sister, Marie, and younger brother, James, moved to Live Oak, Florida where the family bought land and started a farm. While attending school in Live Oak, she met Charles Edward Brim; they became engaged and were married on January 17, 1942 at Clayland Baptist Church where they both worshiped. In September of 1942, Charles enlisted in the Army and they moved to Jacksonville, Florida and started a family, having 2 children. Cecial was a devoted Christian and spent her time and talent assisting with the nursery and Vacation Bible School, and also singing in the choir at Central Baptist Church. She worked at a local lamp shop, then worked in the Inventory Department at J C Penney until her retirement in 1983. In the early 1970's, Charles and Cecial bought a travel trailer and took trips throughout the southeast and southwest US, finally deciding to park their camper at the Hiawatha Campground near Bryson City, NC so they could spend their summers in the cool mountains. After the death of Charles in 1986, Cecial continued to live in their home in Jacksonville and summer in the camper in NC. In May of 1992, she met Rufus Arndt, who was also summering at the same campground. Soon after, they married on August 29,1992. They lived in their home in Land O'Lakes, and later, Arcadia, FL, but continued to spend their summers in NC until his death in 2011. Cecial was a woman of deep and unwavering faith in God. She loved her Lord and Savior, Jesus Christ above all and was deeply involved in the churches she and her family attended through the years. She was the heart of her family and everyone she met was embraced by her love and care. She was loved beyond measure and will be deeply missed by all who knew her. She was preceded in death by her parents; her husband of 44 years, Charles Edward Brim (1921-1986); her husband of 19 years, Rufus Charles Arndt (1920-2011); and by her brothers, Clyde Leon Mims (1917-1931) and James Daniel Mims (1932-1998); her sister, Molly Marie Mims Wills McLeod (1926-2014); and by her daughter-in-law, Joy Richartz Brim (1953-2011). She is survived by her son, Darwyn S. Brim, of Jacksonville, Florida; her daughter, Norma Bunny Brim Johnson (Dale), of Port Charlotte, Florida; four grandchildren and 8 great grandchildren; and step-daughters, Irene Edwards (Doyle), Gwendolyn Jackson (Willis), Madalyn Schaecher (John), and Lorelei Roenicke (Larry). A celebration of her life will be held on Saturday, December 5, 2020 at 1:00 P.M. at Faith Memorial Baptist Church, 6731 Ramona Boulevard, Jacksonville, Florida 32205, with Pastor Wayne Young officiating. Arrangements are under the care of Ferreira Funeral Services. Visit www.ferreirafuneralservices.com to sign the family's guest book.

CECIAL ELLEN (MIMS) BRIM ARNDT, 96, was received into the fullness of God's glory on Monday, November 23, 2020 in Port Charlotte, Charlotte County, Florida, with her loving daughter by her side. Cecial was born on January 5, 1924 in Bithlo,... View Obituary & Service Information

The family of Cecial Ellen (Mims) Brim Arndt created this Life Tributes page to make it easy to share your memories.

CECIAL ELLEN (MIMS) BRIM ARNDT, 96, was received into the fullness...