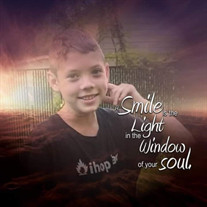 Parker – Brailon Mikohle Parker “Bubba”, age 11, of Starke, Florida passed away on May 6, 2021 at Parrish Medical Center in Titusville, FL. Brailon was born in Gainesville, Florida on August 21, 2009 to his loving mother, Heather Arthur and father, Kevin Parker. He shared his birthday with his stepsister, McKinley, who he was very close with. Brailon was raised in Starke, attended Shell Elementary School and Hawthorne Middle High School before relocating to Titusville a few months ago. He was currently in 6th grade at Mims Elementary School, top of his class. Brailon was the life of his Nanny, Mary Wentz, was a loving son and an amazing brother. He was hard working, organized, determined to be great in anything he set his mind to, and took pride in even the simplest tasks like making his bed. He knew the importance of academics, maintained a 3.8 GPA, and had dreams of going to Harvard one day to pursue his dreams of being a writer which was a goal he was working hard to achieve. Brailon’s favorite subject in school was English for writing. He loved being outdoors, swimming, being in and near the water, exploring, riding bikes, and skateboarding. He was an avid “Nanny Lover” who enjoyed visiting her the most. He also enjoyed shooting guns, playing Xbox, watching his favorite television show, Riverdale, and listening to music. His favorite song was, “Empty” by Juice World. Brailon loved spending time with his close family and will be missed by all who knew him. More than anything, Brailon was a Nannies Baby as she was his world. He was preceded in death by his brothers, Colton Barnhart and Trevor Parker. Brailon is survived by his mother, Heather Arthur of Starke, FL; his father figure and leader, Josh Johnson; his Nanny, Mary Wentz; his brothers, Ayden Clay, Jonavon “Jachovia”, Kambren Axel, and Trenton Shawn; his sisters, Hailyn Grace, McKinley Rayne; his aunt, “Bug” Lacey Jewell and daughters, Jalyaah and Makylee Johnson; his great aunt, Donna Jewell and her sons, Elmer “Ray” and Jonathan “Kyle”; his biological father, Kevin Parker; half siblings, Jordan, Dylan, and Karlie Parker; his grandparents, Faith Jewell, Nathan Arthur, Michelle Arthur, and Angela Seaton; and great grandparents, Darlene Lawson and Danny (Marybeth) Arthur; and many other aunts, uncles, cousins, and friends who he loved dearly. A Celebration of Brailon’s Life will be held on Monday, May 17, 2021 at 2:00 PM at Archie Tanner Memorial Chapel with Brother Jeremy Rea officiating. Interment will follow at Santa Fe Cemetery in Hampton, FL. The family will receive friends on Monday an hour prior to the service at the funeral home. Arrangements are under the care and direction of V. Todd Ferreira Funeral Services and Archie Tanner Memorial Chapel, Starke, Fl. 904-964-5757.

The family of Brailon Mikohle Parker created this Life Tributes page to make it easy to share your memories.

Send flowers to the Parker family.