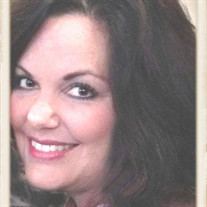 Allison Bullard Broughton entered into the presence of God the Father and His Son Jesus Christ on April 18, 2022. Allison was the daughter of Edward and Linda Bullard of Jacksonville and graduated from Duncan U. Fletcher High School, Neptune Beach in 1988. She graduated from Florida Community College with an AA degree in paralegal studies. Professionally Allison was the right hand to one of Florida’s most prominent Personal Injury Attorneys where she worked for over 25 years. In recent years she worked part time and focused more on family. While engaged to be married, Allison and Mark bought property on Mudlake Road in 2003 and began building their “home above the barn.” Allison married Mark in 2004 at their home in a year that started a wonderful God-filled marriage. About a year later Conner was born and a love affair began between a mother and her boy. While not originally from Baker County, Allison loved its people and it didn’t take long for Baker County to fall in love with her. One of the primary reasons Allison wanted to live in Baker County was that it allowed her to have all of the animals she wanted. She built a home around 10 horses, 7 dogs and many barn cats during her early years in Baker. One day Allison decided she wanted a donkey and she found one. The only catch … it came with three yearling heifers. Now she had cows, a donkey and all the rest. God was gracious and planted Allison and Mark next to the best neighbors in the world, Toppy and Layne Conner. Allison and Layne became quick friends. Allison loved living out in the country. Allison loved watching Conner play on youth baseball, basketball and football teams in Baker County. As a result, she became a 2nd mother to many of the kids on Conner’s teams throughout the years. When Conner was 11, Allison planned a trip to Cooperstown in her Motorcoach and took Conner, Jordan Washington and Josh Holmes with her for a trip of their lifetime. The next year she planned another trip for more boys she loved as 12-year-olds and flew them up and she took them to a Yankees game while in New York. Allison always thought of these boys as her own, even though they all had great parents. Allison loved them like they were her own. Conner, Colby Crews, Ian Vickers, Seth Alford and Garrett Vickers joined other baseball players from Oklahoma and Kansas to form the Tri-State Spartans and almost won the tournament that year! In 2015 Allison, along with Karibeth Satterwhite Rankin, were the team moms of the BCTC Cardinals – “12 against the world” – a team that would be the genesis of the American Youth Football Conference in Baker County. Allison was instrumental along with friends, Karibeth Satterwhite Rankin and Kimberly and Joey Chauncey, in developing the first competitive travel football league in the county. She became “mother” to over 100 kids that year as she was treasurer and managed all of the operations of the league. She also was a cheerleading coach to the younger cheer team which she loved and adored. Fiercely competitive, even with the younger girls, she taught them well and pushed them to be their best. Allison would often say “how great the people of Baker County are” and loved all of the kids she knew as a result of team sports. Allison couldn’t go into Walmart or Winn Dixie without a kid running up to hug her. “Hello Ms. Allison!” The youth of Baker lost a person who dearly loved them and she will be long remembered. As I was writing this, a text came in from a former teammate of Conner’s Cooperstown 12U from Oklahoma. Alexander “Woodsy” Woods text me “I loved Ms. Allison so much and miss her. She is like a 2nd mom to me.” Woodsy is speaking for a lot of kids both in and out of Baker County. It is safe to say Allison made an impact all over the USA on kids with whom she came in contact. In addition to her wonderful parents, Allison is survived by her husband of 18 years, Coach Mark and their son Conner, stepsons Jason and Web Broughton (Sarah), stepdaughter Haley Broughton Costello, sisters Nancy Bullard Davies (Andrew) and Suzanne Bullard Herndon (Randy), and nieces Ruth and Alexandra (Sean)and nephew Torin (Dorothy). Granny Allison loved her grandchildren Taylor, Hannah, Web and Ellie. Allison will be sorely missed but fondly remembered. A Memorial Service will be held on Saturday, April 23, 2022 at 11:00 a.m. at Ferreira Funeral Services. The arrangements are under the care and direction of V. TODD FERREIRA FUNERAL SERVICES, 250 North Lowder Street, Macclenny, FL 32063 (904)259-5700. Visit www.ferreirafuneralservices.com to sign the family’s guest book.

Allison Bullard Broughton entered into the presence of God the Father and His Son Jesus Christ on April 18, 2022. Allison was the daughter of Edward and Linda Bullard of Jacksonville and graduated from Duncan U. Fletcher High School, Neptune... View Obituary & Service Information

The family of Mrs. Allison Bullard Broughton created this Life Tributes page to make it easy to share your memories.

Allison Bullard Broughton entered into the presence of God the...

Send flowers to the Broughton family.