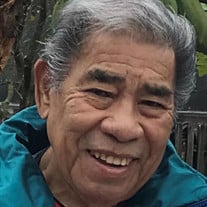 Salita - Adrian “Andy” Alcacid Salita, age 79, of Jacksonville, FL, passed away at Memorial Hospital Jacksonville on January 10, 2021. He was born on August 24, 1941 in the Philippines to Antonio Salita and Kaaliwan Alcacid. Andy proudly served in the United States Navy for 27 years as a chef and was a retired U.S. Postal Office worker. He has been a resident of Jacksonville since 1986, and he thoroughly enjoyed fishing in the St. John’s River. Andy was an avid gardener and a fantastic cook. He loved to sing and drink his Crown Royal. Andy was a great dancer and had a funny sense of humor, he could hold an audience with his entertaining stories. More than anything, Andy was a devoted husband, father, and grandfather. He will be dearly missed. He is preceded in death by his parents. Andy is survived by his loving wife of 51 and a half years, Charito Salita; his son, Adrian “Andy” (Lisa) Salita of VA; his daughter, Lillibeth Bourque of Boca Raton, FL; his 3 grandchildren, Michael, Helen, and Sabrina; and his great grandson, Chip. A Celebration of Andy’s Life will be held graveside on Friday, January 15, 2021 at 2p.m. with Father Rafael Lavilla. The arrangements are under the care and direction of V. TODD FERREIRA FUNERAL SERVICES at Beaches Memorial Park, 1500 Main Street, Atlantic Beach, FL 32233. (904) 249-1166. Visit www.ferreirafuneralservices.com to sign the family’s guest book.

Salita - Adrian &#8220;Andy&#8221; Alcacid Salita, age 79, of Jacksonville, FL, passed away at Memorial Hospital Jacksonville on January 10, 2021. He was born on August 24, 1941 in the Philippines to Antonio Salita and Kaaliwan Alcacid. Andy... View Obituary & Service Information

The family of Mr. Adrian Alcacid Salita created this Life Tributes page to make it easy to share your memories.

Send flowers to the Salita family.